The need to develop more ethically sustainable solutions to power the world’s leisure and light-commercial motorised craft has never been more urgent. Here, in this PBR exclusive, we speak to James Eatwell, the man behind Cox Powertrain’s hydrogen project. Could this technology hold the key to unlocking the sustainable future we seek?

Please tell us, James, how and why was the Cox hydrogen project born? 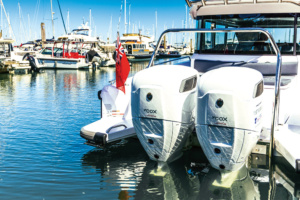 The Cox hydrogen project was born out of a recognition that in the current world environment we cannot sit on our laurels when it comes to spearheading efforts to reduce CO2 emissions from our particular sector. The CXO300 offers a significant opportunity for vessel users to reduce their CO2 emissions purely as a result of the reduction in carbon emissions over more conventional gasoline-based propulsion units. That said, Cox are constantly evaluating technologies that may be deployed in future products and deliver even greater reductions in sector emissions.

When it comes to the routes that the marine sector as a whole might use to approach decarbonisation, we are somewhat more limited than, for example, the automotive sector. In that sector, there is a significant move towards battery-driven electrification, which makes sense for the way cars are driven but makes less sense in our applications where the ability (and sometimes the need) to operate at high power for prolonged periods would necessitate an unfeasibly high weight and volume of batteries being installed. Thus, much of the focus in the marine sector is around considering other low-carbon fuels (such as hydrogen and ammonia) as a means to pursue decarbonisation without having to make significant sacrifices to vessel size and weight.

As part of the R&D role at Cox, it is my place to cultivate a broad range of contacts across industry and academia, and when one of these contacts highlighted a potential opportunity for involvement with the SHAPE UK project, it was obvious to us that this very much aligned with our own goals of investigating alternative fuels while also allowing us to collaborate with the broad range of technical expertise brought together by the project partners.

It’s public knowledge that Cox have been championing the diesel outboard as an alternative to inboard and big petrol 4-stroke power, so is this move into hydrogen power with a view to providing an alternative to diesel power, or ultimately replacing diesel altogether?

This initial project is, at its core, a learning exercise for Cox to understand the implications of working with unconventional fuels. While we have significant internal expertise when it comes to working with diesel-based combustion, the application of alternative fuels brings with it a range of challenges, some of which we can predict, but some of which only become apparent when we start to work with those fuels. The marine sector as a whole is still not entirely settled on which alternative fuel is most appropriate, with hydrogen, ammonia, methanol and others all being considered, so to an extent we have to react to the direction the market is heading in. There is no point supplying ammonia-fuelled engines, for example, if no one stocks ammonia in marinas and ports. I think it is inevitable that the future will see a move away from fossil fuels in the marine sector (as elsewhere), so it is our job to make sure that Cox are ready with a technical solution that meets our customer needs.

Has the decision to explore and pursue hydrogen technology come as a result of pressure from Cox’s investors and stakeholders? 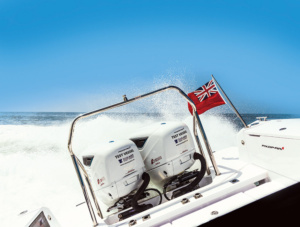 As with any business, our corporate direction is driven by our board of directors. The board has been very clear in defining the future goals for Cox, part of which is the desire for us to be looking to the low-carbon future of the company. Our board recognises the expertise of its technical staff in identifying the best way of achieving these goals, and as such, we have been given a broad remit to pursue the best technical options for any given goal we have been set. Hydrogen is just one of the technologies we are investigating.

How urgent, in Cox’s view, is the need to pursue hydrogen technology?

As the coverage from COP26 has made clear, there is an urgent need for CO2 reduction across all sectors. With hydrogen, as with any new ‘fuel’, there is something of a chicken and egg situation as to whether the refuelling infrastructure is in place before the propulsion technology is there to use it. Equally, for any new technology to be introduced, it has to be recognised that there is a timeline (typically measured in years) to take that technology from an initial concept through to the point where it is ready to sell to the customer. Cox’s challenge, therefore, is to ensure our low-carbon solution is ready for our customers at the point that the market and its supporting infrastructure are ready to support it. There are already a small number of marine hydrogen filling stations that have been, or are being, trialled around the world (e.g. Antwerp Port House in Belgium, Switch Maritime in the US), and there are major bodies (e.g. the ‘Getting to Zero Coalition’ https://www.globalmaritimeforum.org/getting-to-zero-coalition) pressing to have commercial-scale zero-emission vessels in service by 2030. Bearing in mind the timescales for development that I mentioned before, I think this puts Cox where we need to be right now, but there’s certainly little room for us to be complacent.

Can you describe some of the technical challenges involved in converting your existing diesel engine technology to being hydrogen compatible?

In this project, the target is to run the engine as a hydrogen-diesel dual-fuel engine with the intent of a significant proportion of the power coming from the hydrogen fuel. Being a relatively small initial project, this offers us the opportunity to gain the maximum amount of learning in the shortest time. The combustion of hydrogen in this situation is relatively well understood at a theoretical level, so for the engine itself, much of the work falls into what I would call an ‘application challenge’ (i.e. what components do we need to modify to allow us to burn hydrogen?) rather than the fundamental science. While I can’t go into great detail on this, we have come up with some very elegant solutions, particularly around the hydrogen fuel injection systems, to enable the engine to run on hydrogen. Depending upon the findings of this study, subsequent studies may look to transition the engine to a full hydrogen combustion system. In this case, it becomes technically more challenging (and from an engineering perspective even more interesting), and we will then need to start looking at defining a dedicated hydrogen combustion system with changes to key areas of the engine such as pistons, fuel injection and air delivery systems.

That said, much of the challenge in this project is less to do with making the hydrogen burn in the engine and more to do with how to handle the fuel in a marine environment. Typically, hydrogen fuel is stored either as a cryogenic liquid or in our case as a gas in a highly pressurised form, so we need to ensure that we (with our partners at the University of Brighton and Engas UK) have developed a system for safely delivering this high-pressure flammable gas to the engine. In this we can draw from learning in other fields such as the automotive sector, which has previously had significant experience experimenting with hydrogen fuels, so we can adopt much of that best practice (for example, around flashback protection and fuel system venting). The marine sector as a whole is used to handling heavier-than-air flammable gases (think about petrol vapour in fuel tanks and bilges as an example case in point), but hydrogen differs inasmuch as it is a lighter-than-air gas. This means that much of the custom and practice (and indeed applicable safety legislation) is not well suited to hydrogen fuel, so to a certain extent we have to rewrite the book. In this we are very fortunate that one of the other partners on the project is Lloyd’s Register, which is very much focused on the regulatory impacts of working with hydrogen.

Is Cox thinking along the lines of a hybrid system?

The short answer to this is that we would never say never to some form of diesel-electric hybrid. Hybrid systems obviously offer some significant advantages in certain applications, particularly where energy recovery from braking can take place. In the marine sphere, the advantages of a hybrid-type system are a little less obvious (it being impractical to recover energy from braking), but they are still there. Key among these would be the ability to offer a period of operation with completely zero emissions of any sort when operating in an electric-only mode. That said, we still come up against the challenges of packaging a significant enough battery capacity to be useful.

If your aims can be achieved, what, from your personal standpoint, could be some of the most exciting and significant benefits in Cox providing a hydrogen solution?

Without a doubt, the most exciting benefit of a hydrogen propulsion system has to be the ability to provide a zero-carbon solution to our customers. While the provision of low-carbon solutions is a goal of the Cox organisation as a whole, the opportunity to reduce our carbon emissions is something that individual engineers at Cox feel strongly about at a personal level, myself included. The need for marine propulsion systems is not going to diminish overnight, so as engineers we have a responsibility to deliver the best product that we can in a way that has the least environmental impact.

I appreciate it may be difficult to say at this stage, but if the project continues to run smoothly, when might we see a first working Cox hydrogen engine prototype?

The prototype engine is planned to be running on a test vessel by mid-2022, but this is still very much a concept project for Cox at the moment, so we are not at the stage of planning it into our product portfolio just yet!

While being realistic about the distinct issues and very real difficulties facing electric/battery power technology, and likewise the issues specific to the widespread use of hydrogen technology, which option in your capacity as a technician and engineer would you favour the marine industry taking up, and why?

At the risk of making sweeping statements, as the technology stands today, I think hydrogen or one of the other candidate alternative fuels is the preferable option, initially in combustion engine form. Later that may change to fuel cell operation if that technology matures and becomes more cost comparable. There will always be applications where battery electric systems have a viable use, particularly around vessels that are operating on a shorter duration and lower-trip-frequency basis in which the lower energy density of batteries will have less of an impact. For any application where the vessel is operating on longer trips and/or at higher power ratings, the higher energy density of a liquid or gaseous fuel will be the dominant factor.

The man behind the mission 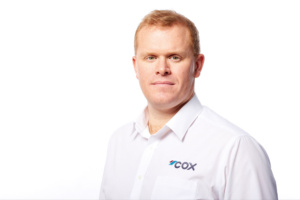 James Eatwell is Cox Powertrain’s Head of Research and Development with responsibility for delivery of Cox’s future-facing research activities. A chartered mechanical engineer with degrees from Sheffield and Cranfield Universities, he has been at the forefront of Cox’s technical activities since joining in 2015. Prior to this, he worked for both consultancies and manufacturers in powertrain projects ranging all the way from early research through to production delivery. He has been messing around in boats (albeit more of the inland type)    since he was seven years old!