HMS reports on the 2021 SOUTHAMPTON BOAT SHOW, which not only confirmed the astonishing resurgence of interest we’ve seen in boating post Covid, but also delivered a thoroughly convincing showcase of which the UK marine industry and the show’s organisers can rightly be proud.

There is little doubt that this year’s Southampton Boat Show was one of the most successful of its kind, not in only in recent times, but in many years. The team at British Marine worked extremely hard to make it so, and their efforts paid off. It’s true that the effects of COVID were undoubtedly seen in this year’s reduced show size – largely attributable to those exhibitors who chose not to attend due to a lack of stock, as well as some, no doubt, who weren’t prepared to take a gamble on the event being cancelled, as in 2020. But whatever the reasons why some may have held back, the fact is, those companies that did not attend most certainly missed out.

The Southampton Boat Show may no longer be the international event it once was, but nevertheless, it remains Britain’s biggest and best festival of boating, showcasing over 350 marine brands with 500+ boats on display. According to its organisers, this year’s event welcomed over 88,000 visitors across the 10 days. This figure was down 14 per cent on 2019 but still represented a great achievement in light of the present circumstances. Wisely, additional COVID-19 measures were introduced at this year’s show, including proof of negative lateral flow tests being policed at the gates. The majority of visitors seemed happy to have these extra measures put in place, and since the event, unlike a number of festivals, no major COVID ramifications have been reported. 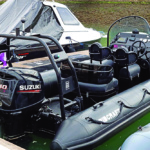 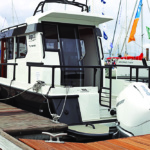 What made the show so successful, of course, was the people. The hard-working exhibitors displayed a tangibly positive and upbeat attitude and gave every impression of being determined to make the very best of the opportunity this 10-day post-COVID shutdown show gave them. This spirit, without question, is the key to any show being an event that people want to come back to, year on year. As for the public, they exuded an eagerness to accept whatever opportunity this year’s event afforded them. In truth, no one knew what to expect because it was clear that comparisons could not be made with previous years. But perhaps more than any other previous Southampton show, the public’s enthusiasm and desire to either make an outright purchase or take up part ownership via the boat club and boat share schemes on offer proved unprecedented.

In terms of the latter, the growing ascendency of boat share schemes, and boat club and part ownership initiatives, did this year’s show a great service by providing a really valuable ‘access point’ for a great number of people wanting to get into boating on an affordable basis. One can see the clear attraction of being able to ‘test the water’ first without having to agree to a big and costly commitment at the very outset. In my view, the whole industry should welcome reputable companies offering such schemes as they’re encouraging a valuable new influx of people into boating. 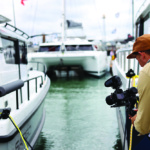 One of the greatest challenges faced at this year’s show, of course, was that which is proving common to many industries and pastimes, namely difficulties with the manufacturing supply chains. One engine manufacturer, for instance, is reported as currently having a demand for 16.5K engines a month, but due to the effects of COVID, at present, the company is only being able to service 6.5K of those engine orders every four weeks. This same scenario is being felt by boatbuilders and gear suppliers the world over. Whether it be the materials and chemicals used in the production of GRP, the supply of upholstery and fabric, computer chips, cleats and hinges, windscreens or engineering parts, virtually everything is in short supply. This means too that the orders boat sellers are placing with their suppliers are either being delayed by up to 24 months in some cases, or distributors and dealers are being told that they can only have X amount of the items they’ve ordered due to supply shortages. While the situation is frustrating for those seeking to buy, it’s also difficult for boat sellers, as recouping their financial outlays on orders becomes a long and protracted business and has the potential to leave them exposed. So, here again, those part share and ‘boat club’-type schemes can come to the rescue by offering customers with boats on long waiting lists a means to go boating until their own boat does become available. The critical issue in all of this is that by whatever means, the industry has to devise ways to ensure that the astonishing post-COVID wave of interest in the pastime of boating is retained and not lost. 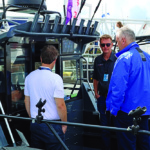 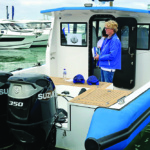 Despite the challenges described, then, this year’s Southampton Boat Show proved a genuinely worthwhile ‘showcase’ with a convincing representation of product from every sector. Whether a person’s interest lay in motor yachts, adventure craft, RIBs, flybridge cruisers, all-weather pilot craft, open dayboats, fishing craft, e-powered vessels, high-performance craft or displacement-hulled boats, there really was something for everyone, along with all the complementary services and equipment suppliers one would expect to see. It was encouraging to note a hearty helping of British innovation being aired at the show too, evidenced in the form of new hull designs, ‘greener’ boatbuilding composites, brand-new boat designs, new models to existing ranges and, of course, innovative electronic equipment. What was profoundly missing, however, was the usual array of clothing and chandlery retailers. In light of this, I wouldn’t be surprised if some entity might view this year’s absence as an opportunity to take advantage of in 2022. 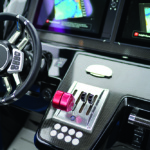 Super conversion of a Suzuki Jimny with integral espresso machine. 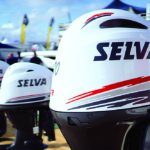 Stars of the show

A whole host of celebrities were spotted in the crowds, including TV presenter and historian Dan Snow, Premiership footballer Bukayo Saka (guest of the show’s automotive partner, Bentley Motors), singer-songwriter Jamiroquai (Jay Kay), and both Georgia Toffolo (Toff) and Andrew Jordan from TV show Made in Chelsea, as they enjoyed checking out the boat displays and even having a go themselves at some of the water sports! Besides the highly successful try-a-boat opportunities, which took an incredible 13,760 members of the public out on the water over the 10 days, visitors also enjoyed watching the adrenaline-packed waterside displays given by flyboarder James Prestwood, who delivered fliteboard and jet ski stunt performances morning and afternoon.

But in conclusion, let’s allow Lesley Robinson, CEO of British Marine, to have the final word. ‘This year’s show has been a resounding success with a fabulous atmosphere as exhibitors and visitors alike have been enjoying meeting face to face. The feedback we’ve had from brands across the industry has been phenomenal, indicating very strong sales from high-quality visitors. I’m happy to say that Britain’s best-loved boating festival has put a real smile on everyone’s face with a fantastic mix of products, talks, entertainment and refreshments. The wide choice of sailing yachts, motorboats, accessories, paddleboards, kayaks and services across the new layout over 10 days has been incredibly well received. We are very much looking forward to welcoming everyone back and building on the success of this year’s resurgence. So please, one and all, make a date in your diaries for next year’s show, which will take place from 16th to 25th September 2022.’ Ruth Thornton & her partner Mark beavered away all day deliverng PBR magazines to all stands. PBR’s own Axopar 28 adventure craft, MY Horizon, was on display to the public courtesy of Offshore Powerboats and Sunseeker London. Thousands of visitors got the opportunity to visit her berth in the centre of the show marina and have the chance to get on board and see, for the first time, the various systems she carries. These include Horizon’s Simrad’s Glass Bridge with twin NSO evo3S multifunctional displays and her V8 Mercury 300hp Verado outboard, as well as the Tunturi e-fat bike and Red paddleboard strapped to her roof rack!