MRL, in association with Southampton Dry Stack, have confirmed they are about to receive delivery of the much-anticipated Stingher 800 Super Sport. A brand-new model for 2022, this new Super Sport replaces the much-loved Stingher 800GT, which has been in production since 2006. 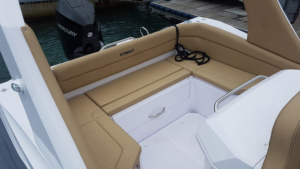 Edward Pedley, MD of MRL and UK distributor of the Italian RIB brand Stingher, told PBR: ‘The new 800 is a totally new hull and deck design from our Italian partner. It’s a boat that has been some 24 months in design and development, in fact. It’s also only been available for sale in Italy for the last 12 months due to its overwhelming demand, so we’re very proud to now make this new model available to the British public as we’re all convinced it’s a very special craft indeed.’

MRL and Southampton Dry Stack state that they have the first Stingher Super Sport 800 due for delivery to the UK at the end of May.