The new triple-engine Axopar 45 comes in no fewer than five versions, of which the 45 Cross Cabin, or 45 XC for short, was the first model to break cover. 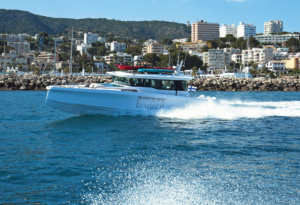 Possibly one of the most exciting boats of the year, the innovative 50-knot 45 XC sets a blinding pace.

It might be wrong to say that Axopar’s new 900hp flagship 45 has been long overdue, but you can’t help thinking that the middleweight sector has been missing something without it. The new triple-engine Axopar 45 comes in no fewer than five versions, of which the 45 Cross Cabin, or 45 XC for short, was the first model to break cover at the Palma International Boat Show this April. All boats are built on a distinctive vertical-stem, twin-step, deep-vee hull, which, as with its smaller siblings, has proven to be a successful formula. The other four alternatives to the XC are the Spyder, the T-Top, the Sun-Top and the Cross-Top, with the Sun-Top due to be launched at the Cannes show this year.

One can presume that the XC was launched first, due to its versatility. This boat manages to pack in a credible forecabin, complete with double bed, a short single berth, storage, and an enclosed heads compartment with shower and toilet. This section of the accommodation can be accessed from the side decks through two gull-wing doors if needed, which also serve to provide fantastic ventilation on a hot day. Normal access is via a door opening through the dash bulkhead, though at a glance you would possibly not realise it existed, such is the clean internal styling. 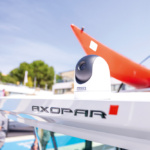 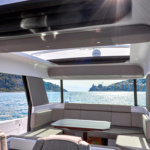 Very clever double doors, they can both be slid aft, or forwards, or be slid together to provide openings at each end. 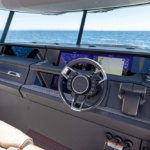 The main cabin is typically innovative, much in the same vein as its smaller relation, the Axopar 37 – but bigger, of course. It has what is termed an ‘adjustable wet bar’ sitting behind the triple helm seats, which can move fore and aft on rails. This generous arrangement comprises a sink, fridge, storage and an optional hob, and all three helm seats can be reversed to face the wet bar when it has been slid back on its rails. The open-air dimension to the main cabin is created by two electric canvas sunroofs, and two double sliding doors on either beam. These doors really open up the cabin and make a strong case for those with a taste for an open boat, who might be leaning towards a T-top. What is particularly clever is that being double doors, they can both be slid aft, or forwards, or be slid together to provide openings at each end. 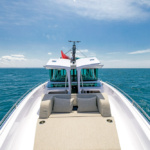 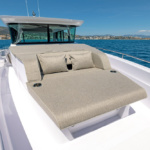 Easy movement onboard with good side deck space and tall bulwarks. 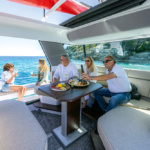 There is also the option of Axopar’s signature aft cabin, something they have become known for across their range. This is accessed via an opening in the aft seating. There is the option here of a wardrobe, and a second toilet, though I doubt this would be a separate heads compartment due to the lack of headroom. The very first 45 XC that we were able to test in Mallorca had the open aft deck as opposed to the aft cabin arrangement. This provides a big deck area with three large hatches giving access to batteries, system switches, pumps and filters, among other things. There is also a long, deep storage section running under the cabin, which you can access from the central hatch. Here you could store a multitude of toys in addition to what can be strapped onto the ‘adventure boat roof rack’. This particular rear-deck layout is already proving an attraction for the offshore fisherman who also wants to offer some luxury in the forward section of the boat for their ‘non-fishing guests’.Movement around deck is made all the easier due to the good size side decks and tall bulwarks. Axopar have created a section on each beam that opens up the midships area well above the waterline, creating not only a platform for swimming or water access but allows a clever extended entertainment area. Uniquely, these opening sections don’t lie at water level. In the foredeck area you have a substantial seating/sunbathing space, and an anchor locker that can only be described as ‘typically Axopar’. With the locker hatch open, you are faced with an anchor sitting concealed in a folding fairlead – facing aft. At the press of a switch, the fairlead powers up and out until the anchor is sitting over the bow in the conventional position – a clean and clever idea. 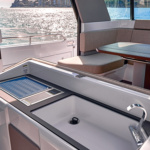 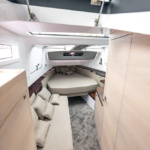 The fore cabin with enclosed heads and shower. 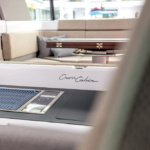 The helm is stylishly high-tech and is built around twin 12in Simrad MFDs. You have the option of Mercury’s joystick, and there is also a standard-fitment 6kW bow thruster, so when it comes to berthing you have pretty much every avenue covered. PBR’s test boat was fitted with a SiOnyx night vision camera, which is yet to be confirmed as being standard fitment but is certainly something worth having. PBR were the only journalists to also test the 45 at night, and this camera performed superbly. In terms of berthing, the joystick system makes light work of moving around the marina, with the bow thruster likely being relegated to being a backup for strong tidal situations. 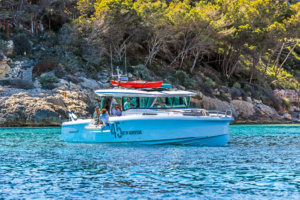 The drive is predictably lively with 900hp on the transom, and when behind the helm it is clear that the hull design syncs perfectly with the Mercury powerpack. You are able to turn tightly and carry out high speed manouvers with the same agility as the smaller Axopar’s in the range, without cavitation, the boat feeling heavy or the hull stepping out. The transition to planing is fairly seamless, with little discernible bow-up attitude. It starts to plane at 14 knots at around 3000rpm and reaches its lowest realistic comfortable planing speed at 17 knots. However, with the motors spinning at 4000rpm and 27 knots showing on the Simrad display, the craft returns 0.93nmpg. Pushing up to 35 knots at 4500rpm, economy actually improves with a consumption rate of 0.97nmpg, and it only really starts to drop once the boat reaches 40 knots. Axopar have been known for their efficient high-performance hull designs, and this relatively sprightly resin-infused 45-footer appears to be no exception. Performance figures are set to improve as they develop their propeller packages.

The price is 520,000 euros (plus VAT and delivery), and of course, there is the obligatory list of extras. Many of these extras will depend on your specific needs, but the gyroscopic stabiliser has got to be a must for this ‘off-piste adventure boat’. Demand for the 45 XC has been strong to put it mildly, with over 100 sold and counting. Delivery will start in 2023, and a full video of our Palma test on the Axopar 45 XC can be viewed on our YouTube Channel. 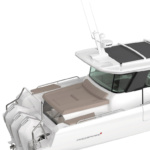 Layout 1 Axopar’s signature aft cabin, something they have become known for across their range. 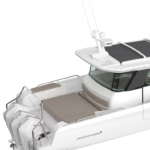 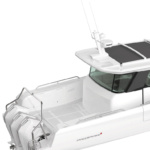 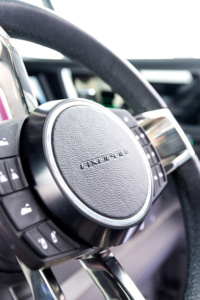 The helm is stylishly high-tech and is built around twin 12in Simrad MFDs, flanked by Mercury’s JPO (joystick piloting)  and automotive style multi-function steering wheel. There is also a standard-fitment 6kW bow thruster, so when it comes to berthing you have pretty much every avenue covered.

This Axopar 45 was fitted with a SiOnyx night vision camera, which is yet to be confirmed as being standard fitment but in our test proved surperb and is recommended. 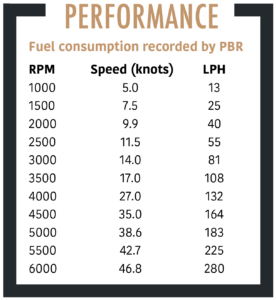