Greg Copp examines the latest Swift Trawler from Beneteau and finds a versatile, traditional and yet contemporary craft that leaves no stone unturned. 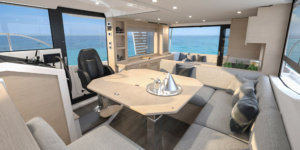 Based on the design of the 2018 Swift Trawler 47, the new ST 48 is also a Beneteau/Andreani Design. It is the latest addition to the Swift Trawler range that spans 35 to 62 ft and is likely to prove just as popular as its siblings have done over the last two decades.

Built with three cabins and the usual saloon sofa bed, the ST 48 can potentially accommodate eight when required. In outline, this craft is no different to the previous ST 47, but below and above deck there have been some changes – likely based on retrospective experience and opinions. The large owner’s cabin now has a bathroom, which incorporates the heads and a separate shower compartment on the starboard side, rather than separate entities. This is not a compromise as the bathroom is large, the owner’s cabin has grown as a result and the day heads compartment is now consequently bigger. A particular feature of the day heads is a larger separate shower compartment, which is now fitted with a teak bench seat. It is also directly accessed by the port-side guest cabin, as was the case with the ST 47 – it’s just that your guests have a bit more comfort. On the starboard side sits the second guest cabin, which, unlike the two single beds in its counterpart, has a double transverse bed, the foot of which tucks under the companionway steps that lead down to the lower-deck corridor. Again, this change in design from the 47 provides more internal cabin space, and a large double-door wardrobe, which can accommodate a washer-dryer in its base. 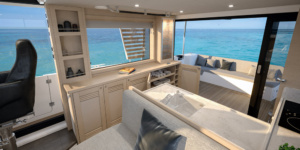 This is one of the lighter colour schemes available.

The changes made to the wheelhouse design are substantial, and unless you must have a double central helm seat, which the ST 47 was fitted with, it is an improvement. This is, of course, subjective, especially as you only have a single helm seat, but being located on the starboard side it has fast access to the side door, the amidships cleat and a transom gate that sits opposite, making going single-crewed easier. The skipper’s seat is a traditional ‘little ship affair’, which suits the character of the boat, and importantly has height adjustment – unlike the previous double bench seat. The helm console is designed for two 12in Raymarine MFDs, which, together with an aft camera and a Cummins joystick (also located on the flybridge and cockpit), makes parking this 48ft flybridge a lot easier.

Having the helm located on the starboard side enables the dinette to be moved from the starboard aft end of the wheelhouse to opposite the helm. This has several connotations, including more dinette seating, and the helm seat can be turned to face the dinette table if you need an extra dining place. The helm seat does not sit on top of the galley worktop with a sink next to it, and the ST 48 galley is bigger, due to the fact that it has more storage – and it also has a whopping 255L fridge. Having the dinette forward makes for a separate social space near the helmsman, while enabling access to the large pop-up TV on the port side. In simple terms, the internal design of the ST 48 wheelhouse has made much better use of the available space than its 47ft predecessor. 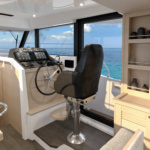 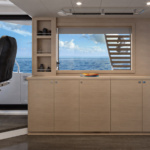 This amount of storage in the galley is a bonus for a passage-making boat. 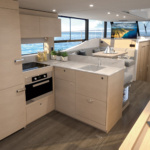 This aft galley design can accommodate a 255L fridge-freezer.

The internal joinery has various options, based on teak or various shades of light oak. It has a contemporary yet traditional character, which goes well with the optional teak decking, while enhancing the trawler boat character. In the same vein, the starboard aft quarter pillar that supports the side deck roof overhang is now of a teak and stainless construction, instead of the previous white slab of GRP.

In the cockpit there is a table that can be combined with the transom bench seat if you want deck-level sunbathing. Alternatively, being next to the galley, it is ideal for external dining. The transom opens onto a large swim platform, which can be equipped with a hydraulic lifting system that can handle 350kg, making it ideal for bigger tenders or a water-level bathing platform. 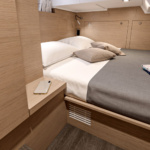 The starboard-side guest cabin has room for a washer-dryer in the wardrobe on the left. 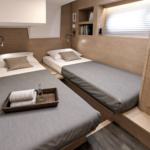 The port-side guest cabin can convert to a large double bed. 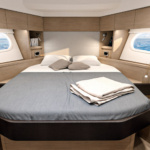 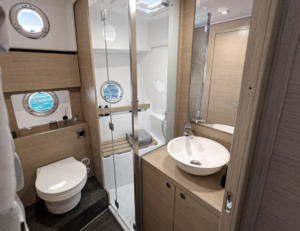 The day heads has a large separate shower compartment.

Up on the flybridge, the helm seat is also now a single affair, but centrally located. Behind are two L-shaped sofas and a central table, and, if needed, the helm seat can be turned to face the table. This is the biggest seating area in the boat, and should you want it, you can opt for a sunroof-equipped T-top, which I suspect few will resist. The flybridge would not be complete without a generous wet bar and open sunbathing space, which in this case sits behind the sofas.

In keeping with its predecessor, power options are 6.7L QSB Cummins engines on shafts. The basic option is the 380hp version, but an optional upgrade of twin 425hp QSBs is also available. The hull design of this semi-displacement boat, as well as that of its siblings, has always proven efficient. Though some may not utilise its displacement cruising potential, should you do so, it has a claimed range of 530nm at 9 knots, with a 20% reserve. It has a low ‘efficient planing speed’ of 18 knots, which is stated to give this boat a 250nm range. This is a speed that many will want to cruise at, and for which the more powerful 425hp Cummins will prove more frugal and relaxed.

In keeping with the reputation of this range, its robust appearance is matched by its practicality and safety. Large walkways, high bulwarks and numerous handrails make access and deck movement safe and easy. In the past, performance and price have played a big part in selling these contemporary trawler yachts – often to skippers choosing to put planing boats behind them. 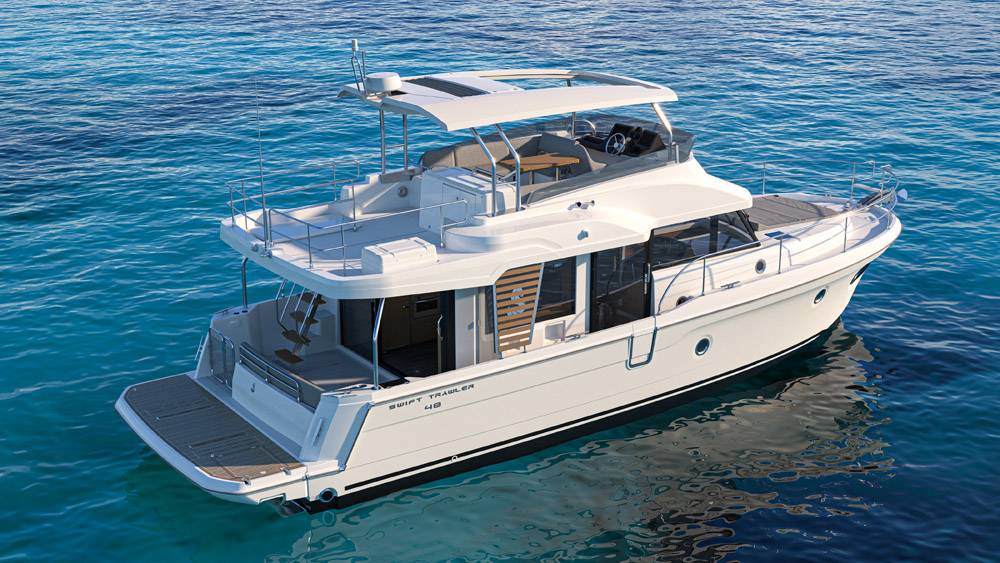