Claiming to go further than any electric motor to date, will the C-POD set a precedent? 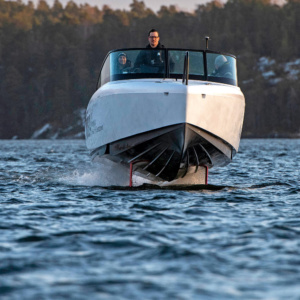 ‘It will last a lifetime without maintenance, is four times more efficient than the best electric outboards and makes for a totally silent boat ride.’

This is a pretty powerful quote at a time when fossil fuel consumption is at the forefront of many people’s minds, especially as the concept of electric propulsion is proving a tough nut to crack. The holy grail of silent powerboating may just have got one step closer with the C-POD – an electric pod drive developed by Stockholm-based tech firm Candela.

In a conventional marine engine, be it electric or fossil fuel, the motor is typically situated above the waterline, transferring thrust to the propeller through a set of shafts, bearings and gears. The Candela C-POD gets rid of the gears altogether. Two ultra-compact yet powerful electric motors are mounted beneath the hull in a torpedo-like casing – directly driving the propellers. Each motor is coupled inline to a propeller, which minimises friction losses. Contra-rotating propellers also provide the benefit of higher propeller efficiency than a larger single prop. The engineering challenge was to make the electric motors sufficiently compact, as being submerged, they need a small diameter in order to cause minimal drag. To accomplish this, Candela’s engineers had to rethink electric motor design, effectively from the bottom up.

For the C-POD, Candela opted to increase the RPM and lower the torque to boost the ‘power density’. The best way was to split the thrust needed between two propellers. The reason is that maximum RPM is limited by the speed of the propeller tip moving through water. The speed of the propeller tip is a direct product of RPM and propeller diameter, so splitting the load over two propellers allows for propellers with smaller diameters, and thereby higher RPM – and in turn, smaller motors. Placing the motors under the water solved the problem all electric motors face, namely heat. This enables higher operating temperatures and more power from the motors, as the first obstacle facing a small high-power motor is excess heat. With the C-POD, there is almost unlimited cooling power.

Candela’s C-POD weighs just 26kg and has no gears, therefore the C8 is totally quiet, even at 30 knots, Candela claim. In terms of maintenance, the C-POD will last 3,000 hours without any servicing or winterisation. Flying above the water on foils, the C8 consumes considerably less power: in this case, it is claimed that it uses 80% less energy than a conventional monohull planing boat. Currently, the C-POD is fitted to the Candela P30 electric shuttle ferry and the Candela P12 water taxi, as well as the new C8 sports boat. Developing 50kW, a single Candela C-POD has enough thrust to propel Candela’s 28ft P12 12-person water taxi at a speed of 30 knots. The bigger 30-person P30 requires two C-PODs for the same speed. When pushing up onto the plane from its low-speed displacement mode, the motor can produce a short-term power boost up to 70kW. 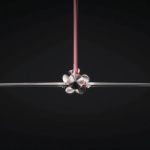 The C-POD with its wide fins acts as a foil and creates little drag.

Total simplicity – this is an engine and drive all in one.

The props are rear-facing. 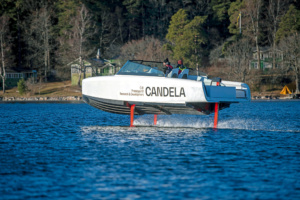 The new C8 is quite a development on the previous C7 (previously featured in PBR). The C7 used a Torqeedo 55kW electric outboard, rather than a submerged streamline power plant like the C8. Candela claim the same 50nm range at a slightly higher cruising speed of 24 knots (as opposed to the C7’s 22 knots) for the C8. Like the C7, the C8 is entirely constructed from carbon fibre, right down to its matrix of stringers. This goes some of the way to explain its price tag of 290,000 euros (plus VAT). The battery, like that of the C7, is BMW’s class-leading 40kWh i3 battery, which weighs in at around 240kg. Being carbon, the hull of the C8 is very light, so the whole boat displaces just 1600kg.

The C8 has a claimed top speed of 30 knots, which would not be achieved with just 50kW (67hp) if, like its predecessor, it did not ‘fly’ on foils. Foils are nothing new, but the flight computer-like system that controls them is. The foils deploy beneath the boat at the same time as the engine descends and trims to a depth to match. The foils comprise one full-beam foil forward, which moves vertically courtesy of two vertical blades, while the aft foils are located either side of the C-POD. However, there is more to the system than just putting down foils to provide lift. To give this boat the stability it needs to be driven like a sports boat, the ‘flight computer’ controls the height and angle of the foils in relation to the sea state, steering and speed. To understand the sea state, it uses a series of forward-mounted sonar sensors that feed information at a rate of 100 per second, in terms of wave height and direction. The foils adjust accordingly, providing a level ride into rough weather. Candela claim this boat can run through 1m seas with little pitching. The foils also adjust in height when turning, by lowering the foil height on the inside of the turn. This provides the heel required to counter the centrifugal force placed on the boat, while also providing to a degree that tight-turn effect. 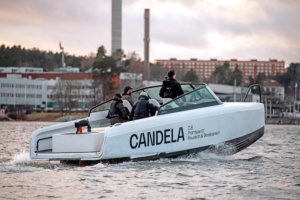 The Candela can operate in shallow-water mode at the touch of its multifunction display. The foils will retract and it becomes a conventional boat, and as such has a maximum speed of 16 knots. It then has a draught of 0.5m, as opposed to its foiling draught of 0.8m. If you run the battery to its preset 80% discharge level, it has a 4-knot limp speed for 3nm. At 20 knots it uses 0.8kWh per nautical mile, the same energy content as 0.1L of petrol. It comes with digital charts and that all-important software that tells you how much power you are using, and how much range you have. There is also an app that mirrors much of the MFD, while also providing you with the boat’s location. Recharging from full discharge is either a conventional 230V charge for 13 hours or, with the optional three-phase dockside charger, 2.5 hours.