Possibly designed for James Bond, this multi-purpose mini-sub is the ultimate water toy. 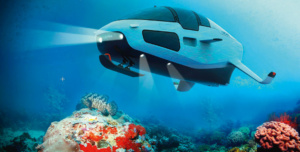 This mini-sub can dive to 50 metres.

The world of compact submersibles has taken an interesting turn with the arrival of the DeepSeaker DS1. Produced by Italian company iSpace2o, this mini-sub is electrically powered and boasts an oxygen production system to extend its time below the surface. It sounds very James Bond, but this is a pleasure craft that is not only aimed at the superyacht market but is also intended to be an exclusive pleasure craft in its own right. Consequently, it has been designed to be trailered – and stored in a garage should the need arise.

Not surprisingly, the construction is composite in order to keep the weight down, and it can accommodate four people. Power comes from two electric pods, and we understand that to give this boat even greater range, an electric/hydrogen hybrid version is under development. This vessel can dive to a depth of 50 metres through the use of ‘mobile ballast’, but it can also operate on the surface as a hydrofoil at speeds of up to 23 knots – though I suspect its range at this speed will be fairly limited, due to battery capacity. However, its real purpose is running submerged, and for this, its oxygen extraction system is able to produce breathable oxygen from seawater. Technical details about this patented technology at this moment in time are very limited, but the concept is nonetheless impressive. 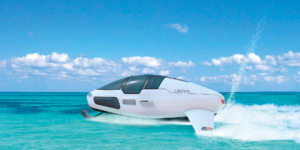 On the surface, this hydrofoil can reach 23 knots.

Propulsion comes from two DeepSpeed steerable pods, which apparently use 40kW Thor high-torque motors. PBR featured the DeepSpeed 120e back in the summer of 2020, when it first emerged as a concept for mini-sub propulsion, and it appears that this model, or a motor closely based on it, is used by iSpace2o. DeepSpeed loosely refer to the 120e as a form of jet engine, albeit one that produces propulsion through water. They state that, like an aeronautical jet engine, it becomes more efficient with speed, and they claim that it is more efficient, like for like, than conventional propellers and water jet systems. This is not an unreasonable claim, as in the case of a propeller, cavitation and the effects of tip vortices (inducing drag at the tips of the props) do not exist with DeepSpeed. Normally you could expect that there would be some form of internal turbine producing propulsion back through a drive nozzle; however, we are informed that there are no internal moving parts, and that water is driven through the pod by means of electrical induction. 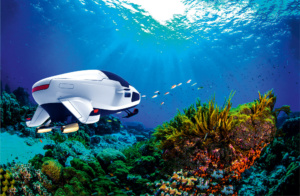 Courtesy of hydrophones, the DeepSeaker can listen to the marine world outside its hull.

It is equipped with a digital dashboard with iPad connectors, GoPro cameras and hydrophones for listening to marine life. Features include a CO2 level alarm, a depth pressure reader, an emergency buoy with EPIRB, emergency extra oxygen supply, seat belts, GPS, 3D echo sounder and more. An innovative on-board computer not only monitors oxygen, CO2 and air quality but will also bring the vessel back to a safe operating depth should it be inadvertently dived below 50 metres. In the case of a total failure, a perimeter airbag will inflate to bring the DeepSeaker back to the surface.

The DeepSeaker is intuitive, so a simple piloting course is available that then qualifies the certificate holder to helm it. Prices begin at 950,000 euros, so most will no doubt end up as superyacht toys.