In the first of a series of three articles, Paul Glatzel offers advice on the intricacies of slow-speed handling … 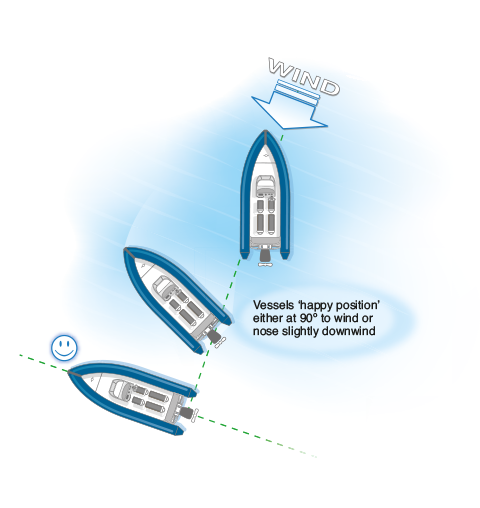 As the chillier winter days (hopefully) become a distant memory, so all of our thoughts turn to the spring and summer and plenty of days getting afloat and enjoying powerboating. And whether you are an ‘old hand’ and have been boating for years or you have just got your first boat, there’s no doubt that we can all ‘brush up’ our slow-speed handling skills. Manoeuvring in the area of a slipway or in a marina always draws the crowds, so the better you can become at slow-speed handling, the more relaxed and enjoyable your time afloat will be.

In this series of three articles, we’ll look at areas such as coming alongside pontoons, turning your boat in tight spaces, man overboard and higher-speed handling. However, let’s start with the basics by looking at how your boat handles and how to ensure that it’s always you in charge.

Most powerboats up to about 30ft have either an outboard or an outdrive drive system. The ability to direct the thrust as forward or reverse is engaged creates a really key characteristic of powerboats. As a general rule, turn the wheel in the direction you want to go before engaging gear – ‘steer then gear’. When engaging ahead or astern, a mistake often made is to put on far too many revs. Work on the basis that in pretty much all conditions, for any manoeuvre, all you need is the ‘just in gear’ setting – i.e. tickover. More revs are unnecessary, and given that ‘what goes on must come off’, they often lead to masses of forward revs, followed by masses of reverse revs, followed shortly afterwards by either harassed shouting or the crunch of an expensive repair job. 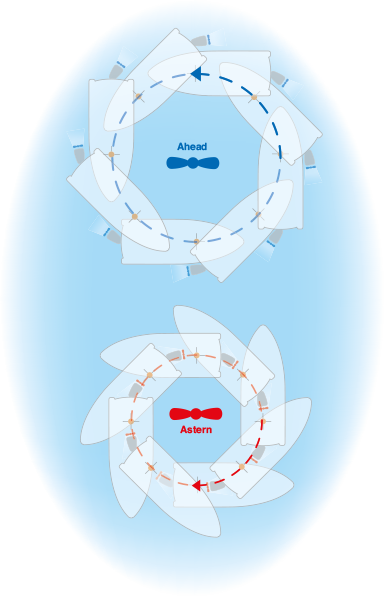 Many a powerboater has been caught out by the wind with what seemed a simple marina manoeuvre spiralling rapidly downwards into an embarrassing and stressful episode, with, of course, a huge crowd watching – and if you are lucky you avoid the need to repair the tubes or gelcoat.

Dealing with the wind effectively starts with an understanding of what it does to your boat. If you drive a powerboat directly into the wind and stop, what will happen? Of course, once forward momentum is arrested, the wind will eventually push the boat downwind. However, the key question is how the craft will lie relative to the wind. Try it and you’ll soon see that the bow will rotate so that the boat lies side on to the wind/waves. It will do this too if you position the stern into the wind – albeit it will rotate far slower.

Understanding how the wind affects the boat is really key, as so often the problems people get into in a marina are because they fail to foresee the effect of the wind and get caught out. What the wind does to your boat is entirely predictable.

The way a boat turns at slow speed is key too. Going ahead with the steering fully one way, the diameter of the circle created is bigger than when going backwards. This is due to the position of the craft’s ‘pivot point’, as when turning going ahead the boat rotates about a point roughly a third from its bow. When going backwards the point is roughly a third from the stern. 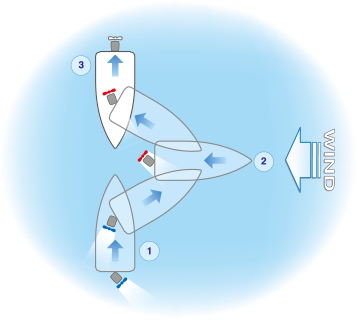 Tidal stream or current (if on a river) has an effect too, as in any manoeuvring situation, consideration needs to be given to where the stream is going to take the boat. You can use the stream to your advantage too, and there’s a great technique called ‘ferry gliding’ that can be used to move the boat across the stream. As per the image, angle the bow slightly off the stream and then use small amounts of ahead to balance the effect of the stream and voilà – you are moving sideways. (See Ferry gliding)

Getting good at any of these skills only comes with practice, so make sure you find the time to go afloat and work on improving your ability. There’s nothing more satisfying than absolutely nailing a coming alongside with loads of other boaters watching.

As you start to use these skills in close-quarter situations, there’s a need to make sure that you factor in all of these influences ahead of starting your manoeuvre. To help you remember to think through all of these factors, think ‘APE’: Assess – wind, tide, depth, other craft; Plan – in light of the assessment create a plan; Execute – then you can go ahead, but always have an escape route. Often boaters fail to do the assessment bit, which just makes the plan less likely to work. The water is a dynamic place, so keep your wits about you and be ready to amend the plan as necessary.

And if it all goes ‘pear-shaped’, do not power out of the problem as this rarely solves the issue and tends to keep the boat repairers in business. Go to neutral, and if necessary let the bow swing round; carefully and slowly manoeuvre to let the boat settle and gather your thoughts – remember there is no shame in needing to abort and try again or find an easier berth. 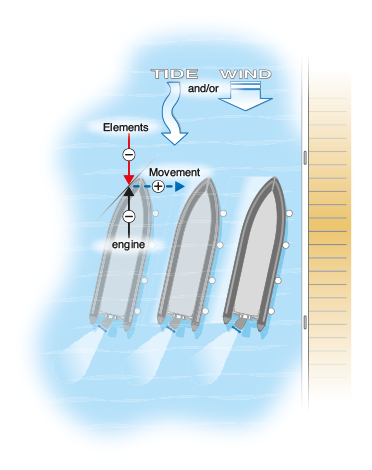 In tight marinas, one of the key skills to master is being able to turn the craft round in a small space. This can be a really easy manoeuvre but is often made far more difficult than it needs to be because the principle of ‘steer then gear’ is not being applied.

Before commencing a turn, think ‘APE’. The key for a turn is where the wind is coming from, as if at all possible, turn by putting the bow through the wind – as the wind helps the bow come round. In a channel or between two lines of boats, generally position slightly upwind of the midpoint. Go to neutral. Steer fully towards the wind – momentarily (1 second or so) in gear forward, then again until the bow has turned through about 90 degrees. Turn the wheel fully the other way. Reverse momentarily, and again. The craft will be pretty much fully turned and ready to exit the turn. Don’t forget to keep looking around throughout.

Two key points to remember when executing a turn (aside from ‘steer then gear’) are that by only momentarily using the gear, not much momentum is created, so the turn occurs in a smaller space; and don’t forget where the back end of the boat is – avoid it swinging too close to other craft.

So why not get afloat and try these manoeuvres? Start on days with a bit of wind and build up as confidence grows to a bit more wind. It won’t always go right, and never forget it’s only a boat, so if something goes wrong, keep hands, feet, children etc. clear of other craft/hard objects. 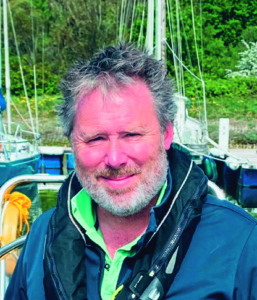