Built to perform, this 50-knot boat also has long-legged qualities.

The Focus Power 36 is a stylish high-performance motor yacht built to cater for the needs of the modern powerboater. This is Focus Power’s take on their new model, and to be fair, they have packed plenty into a 36ft sports cruiser without giving it a ‘Jack of all trades’ character. Designed by established naval architect Tony Castro, it features a good range of living and social space, and its deep-vee hull makes it equally capable when it comes to water sports and long-distance cruising.

Unusually for a boat this size, it has a broad range of engines – four fossil fuel and one hybrid option. The four diesel engines, not surprisingly, are sterndriven. There are two Volvo D4 options, in 270hp and 320hp forms, driving through Volvo’s new DPI duo-prop sterndrives. The 320hp D4 will likely prove popular, as this established 3.6L engine, coupled to the latest-generation DPI sterndrive, will provide a good combination of power and economy, plus the legendary grip that Volvo duo-props have become known for. However, the twin 270hp D4 version should not be underestimated – any less than the twin 270hp Mercury Diesel 3.0 TDI should be. Apart from still giving this 6.5-tonne boat a healthy top speed of around 37 knots, these engines have a much lower price tag than the 320hp D4 version. There is also a twin 370hp Mercury 4.2 TDI engine option, which driving through Bravo 3 sterndrives pushes this boat to a claimed top speed of 50 knots. With a basic price of 290,000 euros (plus VAT), this engine option is actually 10,000 euros less than the cost of having 320hp D4s, which just shows how much Volvo feel they can charge for the 320hp D4. The D4 is a good engine, but then so is the Mercury 4.2 TDI, which being based on the Audi V8 4.2 diesel engine clearly has a good engineering pedigree. In heavier craft, the Mercury 4.2 is outclassed by Volvo’s bigger D6, but it is perfect for the Focus Power 36. It gives the FP36 a level of performance that few in its peer group achieve – as not many manufacturers build sports cruisers that can easily cross the 40-knot barrier.

At the other end of the spectrum, Focus Power are developing a hybrid drive system based on the Volvo D3. At the moment they are not prepared to reveal further details, but diagrams show that it is an inline set-up with sterndrives. The D3s are likely to be 225hp in output, and with the hybrid motor inline between the engine and sterndrive, they will give a huge boost in terms of torque, which will be felt most at lower speeds. Further up the spectrum, the hybrid drive will have less effect, but one can expect this boat to have a top speed in the low to mid 30s. It will also have the ability to run purely on electrical power at displacement speed, so if you have the sort of passage that many Solent marinas have out to the open water, you can run in near silence for a while before firing up the engines. On this subject, there will be two large lithium batteries sitting on the centre line forward of the engines. These will be big, pretty heavy and certainly costly, and this factor will have had some bearing on the choice of using the compact D3. However, as this Dutch boat has also been designed with the inland Dutch waterways in mind, the logic behind the hybrid makes good sense. Being electric, the hybrids will have a very strong torque delivery at low speed, making them responsive when berthing.

The double helm sits relatively high and the top of the window line accommodates this, so one can suppose that tall skippers will not have too much of a problem with their vision being partially shut out. When opened, the long sunroof enables the helmsman to stand and get a good, elevated berthing perspective. There are only two helm seats, and for good reason – the side decks are sensibly wide enough for crewmembers to safely walk forward. It is the age-old trade-off of cockpit space versus side deck width, and the FP36 design rightly favours the latter, along with tall old-school guard rails. Though the cockpit is not the largest, it does have a giant 1.9m x 1.9 m sunbed and a U-shaped dinette, both complemented by a cockpit galley opposite, rather than the normal wet bar affair. Consequently, it is equipped with an 80L fridge, sink, storage and gas hob, which is supported by a smaller sink/cooker galley below. For keen water sporters, there is the ‘must have’ option of a hydraulic bathing platform, something that is becoming increasingly popular but not so often seen on boats this size.

Below decks is the traditional two-cabin design, with both cabins offering large double beds. The forecabin has a 1.9×1.6 m double and the under-sole mid cabin a 1.9×1.5 m bed. Usually the forecabin has a narrower bed due to the taper of the bow, but the FP36 sacrifices some floor space for the benefit of a wider bed. The heads has en suite access from the forecabin, as well as a door to the saloon. The shower does not have a separate shower compartment, but then a 36ft sports cruiser has only so much space to play with. Consequently, the small lower galley is split between the starboard side and the aft saloon bulkhead, with the mid-cabin door between the two sections – unusual but it works. All the below-decks accommodation enjoys plenty of natural light from the long hull windows and the cross-beam roof light that sits behind the windscreen. 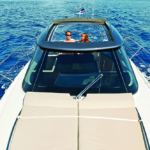 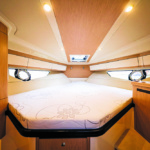 The forecabin bed is generous. 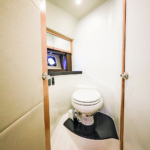 The heads is fairly compact but with full headroom. 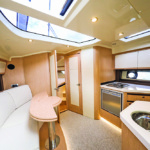 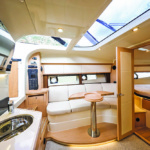 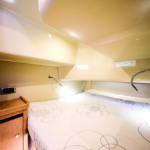 This is clearly a boat with a strong emphasis on sports. It offers a good range of engines to choose from, particularly the option of having 740hp in a 6.5-tonne boat. It will likely prove frugal due to its lack of surplus fat, and its deep-vee hull should make it a good offshore boat. Though it makes good innovative use of the space available, it is not a floating caravan. It has been designed to be driven, and as a result I suspect it will prove popular.