Stylish and sturdy, this retro runabout is also a credible lightweight passage maker.

The new 9.5 WA (walk-around) is their latest launch. Based on the same hull as the 9.5 Sport and 9.5 Cabin, it features a schooner-style rounded stern, similar to the design used by Balearic-based Menorquin Yachts.

This unusual-looking retro runabout is a perfect example of the innovative originality of Italian design. It is also an example of the many established Italian shipyards that, if it was not for the efforts of modern PR, would otherwise be unknown in the UK. The Naples-based Mimi Shipyard hails back to 1975 and is still run by its hands-on founder Salvatore Senese, building a range of traditionally styled planing boats.

The new 9.5 WA (walk-around) is their latest launch. Based on the same hull as the 9.5 Sport and 9.5 Cabin, it features a schooner-style rounded stern, similar to the design used by Balearic-based Menorquin Yachts. The hull forefoot is suitably sharp, keeping its rakish lines for 30% of the hull length before the hull lines widen sufficiently to create a 3m beam. A traditional chine runs to the stem, with two spray rails beneath, and with a reasonable degree of forward flair you can expect a dry ride. Unlike the Menorquin range, the Gozzi Mimi 9.5 WA is a planing boat, albeit a traditionally styled one, powered by shaft-driven engines. Apart from the design headache of mounting sterndrives in a rounded stern, it would not have been in keeping with the boat’s character. The diesel engine options are either twin 200hp Yanmars, twin 230hp Yanmars or a single 250hp Yanmar. Performance is claimed, not unrealistically, to be 27 knots, 32 knots and 25 knots, respectively. However, given that this boat is not really aimed at the performance sector of the market, one suspects that the frugal single 250hp Yanmar will likely prove popular, with its potential range of over 400 miles. Engine access in a boat with a large open cockpit is an easy affair, and all power configurations will provide plenty of space around the engine/engines, considering this boat has a 3m beam. 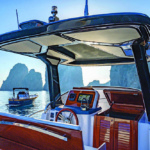 This galley is more than enough for weekend stays. 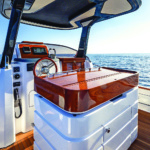 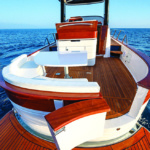 The 9.5 WA is the upshot of the success of the previous 9.5 Sport. It features a redesigned deck, which better exploits available space with its symmetrical central-console design. The boat integrates a number of innovative solutions: firstly, the rigid T-top supported by two side arms provides shade through a breathable lightweight mesh, as opposed to a heavier GRP roof; secondly, the high-gloss mahogany wet bar module hides a seat beneath, which with its mahogany top folded back creates a double helm seat; thirdly, with the whole mahogany bar top folded forward, a sink and double gas hob are revealed, complemented by a full-size fridge beneath. When underway, you have the option of folding down a teak footboard from the front of the wet bar module if you don’t want to stand, which given the height of the seat makes very good sense.

When it comes to sunbathing, the 9.5 WA features a half-beam sunbed inside the port quarter, which is really a drop-down table disguised by an infill and surrounded by a quarter-circle sofa. Tucking the sunbed into this corner enables access to the equally stylish curved starboard-quarter stern gate – the chunky construction of which cannot fail to impress. The long 1.2m teak bathing platform is a substantial extension of what really is an 8.3m boat, but its raised position makes boarding a breeze. The forward triple sunbed will naturally prove popular, surrounded as it is by thick real-teak decking. Sitting higher than the cockpit, the foredeck is encircled by mid-height guard rails, which serve to hang fenders on more than anything. Probably the most striking aspect of the boat is the wide mahogany lip that runs around it, sitting atop the bulwarks. As much as enhancing the simulated clinker-style hull, this feature makes a statement about the quality of the construction. The hull lay-up is via vacuum infusion, as Mimi aim to achieve a high strength-to-weight ratio with all their boats. 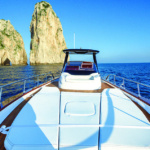 Good use is made of the long foredeck. 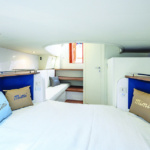 No dinette seating means a wide bed in its place. 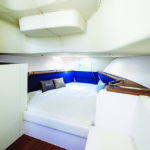 Below decks is a twin-berth layout, though unusually Mimi have not created this in the form of a convertible dinette/table. One can suppose that due to the inevitable lack of headroom in a 9.5m walk-around boat, the designers took the not unrealistic stance that nobody is going to really sit down here, especially on a warm Mediterranean evening. Aft of the bed sits a low hanging locker, and there is a short settee to starboard. Importantly it features a separate heads compartment to port, which has full standing headroom and a shower – though not in a separate cubicle. In fairness, a sensibly sized heads with a shower in this size of boat is always a bonus. With the foredeck running at the same height across the beam, this boat does not lose any internal space in the extremities of the cabin. This extra room has not been turned into the usual series of ceiling lockers, but instead a mahogany lipped shelf runs around the edge of the bed, which apart from anything else gives an increased perception of space.

This boat at the moment is indigenous to Mediterranean waters, where traditional and less conventional designs flourish more than they do in UK waters. Though there are many who favour sterndrives or outboards in a 9.5m boat, there is so much to be said for shafts, especially on a rough day. It appears that Mimi are looking to make an impression in northern Europe, where Water Sports Paradise in Holland have been appointed their agent.