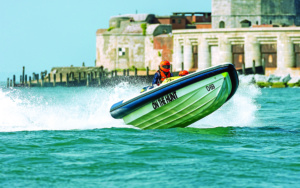 When Sir Max Aitken and his newspaper, the Daily Express, launched the original 150-mile Cowes–Torquay race in 1961, his aim was to improve the breed of pleasure craft and their engines through offshore racing. Victory that year went to the legendary Tommy Sopwith in his 25ft wooden Christina Thunderbolt propelled by two V8 Cadillac engines at an average 24.7mph. Tommy would have spilled his gin and tonic in amazement to learn that this year’s race saw the all-conquering Drew Langdon/Miles Jennings 43ft Outerlimits Silverline average a staggering 94.7mph. Sir Max has made his point.

The race’s 60th anniversary certainly threw up headlines, dramas and thrills. It was a commanding Langdon/Jennings hat-trick victory – now challenging Italian Renato della Valle’s four consecutive victories from 1982 to 1985. Then, their Silverline set a staggering new course record. By contrast, the oldest boat in the race (58 years) won its Class 4 (Historic Offshore) with an average crew age of over 73. A Class 3 entry sank miles off the treacherous Jurassic Coast. And another Class 3 flipped and ‘stuffed’ itself at 60mph only yards away from the sheer rock cliffs at the notorious St Alban’s Head. Happily, despite some bruising, soakings, stiff knees and cracked ribs, all crews live to fight another day. 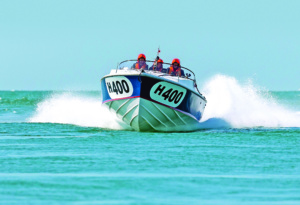 Organised by the British Powerboat Racing Club (BPRC) under the auspices of the national racing body, UKOPRA, a field of some 30 entrants elected to race the longer 200-mile course from Cowes to Torquay and back to Cowes (CTC). Alternatively, the Cowes–Poole–Cowes (CPC) – largely for the historic and smaller classes – provided a nearly identical 100-mile course but only as far west as N.E. Shambles, a mid-Channel buoy just short of treacherous Portland Bill.

‘The weather gods were certainly with us,’ commented veteran entrant John Caulcutt, who has competed in seven CTC races and was crewed by former Harmsworth Trophy winner David Allenby. Carbon Neutral’s 2x125hp Hondas in his Revenger RIB seemed to produce insanely meagre grunt against the powerful 44ft+ CTC Class 1 and 2 competitors boasting up to 2000hp and over 120mph+ capability. And again, among the CPC field, a 200hp Class 3 outboard in a lightweight monohull seemed outgunned by the thundering 800–1000 hp V8 inboards of the historic 1960s–1980s entries with their heavy hulls – and in some cases heavy crew! 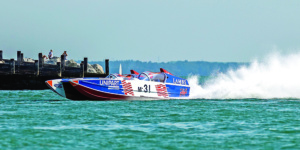 The mighty Langdon/Jennings Class 1 Outerlimits is regarded as one of the best-set-up UK race boats and proved a popular win. It employed its 1900hp MerCruiser engines astutely in the benign conditions, but Italians Schepici/Montavoci/Magnani’s giant Metamarine Tommy One – a leviathan marathon boat propelled by two 950hp Seatek diesels with 115mph+ capability – finished a mere nine minutes behind, averaging 88.8mph. ‘Tommy One kept us on our metal all day,’ commented Langdon after the race. ‘At no time did we feel we could let up.’

However, the race nail-biter was the scamper for fourth and fifth places. This developed into an insane 200-mile tussle with wide open throttles and neck-and-neck racing. The combatants were the classic Toll/Bontoft/Peet Dry Martini and Pippa/Blastoff carrying the Griffith/Weller/McCowan combo. It was 1300hp of snarling V8 Chevrolet petrols against 1400hp of whistling straight-six Seatek diesels – a 1972 36ft Cigarette challenging a 43ft 21st-century Buzzi RIB.

‘Pippa/Blastoff jumped us at the start, so we then played a 70–80 mph catch-up for the next 180 miles,’ stated Christian Toll, ‘and although Dry Martini had got closer and closer, it was only blasting into the Solent that we managed to slip inside her. So we trimmed her out fully and gave it the beans. Then I thought I was going to die!’ Freak tidal overfalls off Yarmouth, compounded by large cruisers criss-crossing the course, ‘threw us skywards, only to trip violently on her stern and we nearly nosedived at over 80mph. Pippa/Blastoff gained over 100m. We had our hearts in our mouths but crossed the line 18 seconds ahead to take fourth place.’

Entrants, spectators and organisers alike applauded fifth-placed Dorian Griffith’s pluck, having just lost his celebrated mother, Sue, only the night before – herself a tenacious racer during the 1960s. Dorian said: ‘We put the throttles against the stops and kept ahead of Dry Martini on the outward legs. On the return, we swapped places after we hit the overfalls at St Alban’s Race – I thought we were heading for the moon she reared so high. But we were racing for Mum. She’d not countenance us pulling out – nor easing off. It’s not the Griffith way!’ It is this spirit that makes offshore powerboat racing so very special.

Sixth home was the recently restored Ward/Lores/Hall 1983 wooden 31ft Cougar Unipart Lambs, the only catamaran in the race and propelled by small-block 360hp Chevrolet V8s. ‘It was her maiden race,’ reported Robin Ward. ‘With a fuel load for a full CTC and being overpropped, we could only produce 3600rpm of our 6000 available. But as the load lightened, we saw decent speeds and great handling, averaging north of 60mph.’ Work to be done, then, Robin!

Next, the Sheldon/Flewin 28ft Spectre Poland Riptide Espresso rig averaged 57.4mph but was plagued by infrequent mechanical issues. They were the first Class 2 boat home and just ahead of the doggedly persistent Whitley/Cureton Shakespeare Fugitive (49.96mph), which has competed every year since 2008, and Carbon Neutral (44.7mph). Both these latter vessels have done Round Britain races and possess crews in their 70s – one in his very late 70s. Bravo, the oldies!

Retirements told their own stories. The extravagantly noisy Aldington/Spenser Buzzi monohull, Vintage Torque, was pronounced ineligible for the CTC with only one engine. ‘So I fitted a jet ski unit alongside the 1050bhp Chevvy and passed scrutineering,’ laughed Gary Aldington, ‘but the gearbox blew spectacularly – and I mean spectacularly – as we approached Torquay. And that was that!’ Blackball Racing, On the Pull and Mr Mako succumbed to a variety of electrical and mechanical issues. 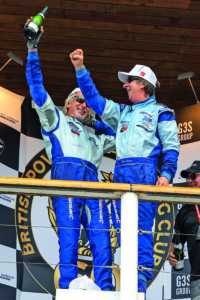 Although only a 100-mile race, the CPC provided the real dramas and triumphs as the smaller but quick Class 3 race boats headed out into the open seas around the notorious St Alban’s Head. First to flip was the Reeder/Foster Ananab Racing, a beautifully prepared Ocke Mannerfeldt bewinged ‘batboat’. While ‘batting’ along beside the veteran 1963 Bertram 31, Thunderstreak, her steering failed at over 60mph only yards from the sheer rock cliffs under Anvil Point, causing her to roll, flip and nosedive. Thunderstreak swung round to render immediate assistance, but Ananab’s crew signalled they were OK, albeit winded and with some broken/bruised ribs. Spectator boats and course marshals had begun to converge, thereby releasing Thunderstreak to continue racing. 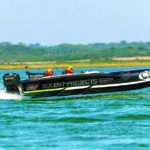 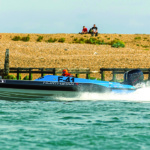 If there was ever a story of pluck in Class 3, it has to be Motorvated Racing. A potential catastrophe was avoided when this Culver/Unwin Phantom 19G was holed on the return leg from E. Shambles and started sinking. Eventually rescued from the rough tidal seas in the notorious St Alban’s Race, the boat was towed into Poole. Back home in Essex, repairs began, and in 24 hours its flushed engine was restarted. Quintessential Class 3 spirit!

CPC winners’ speeds in the benign conditions were unusually high. Won by the ultra-lightweight 800bhp Younger/Rickards Northstar RIB at a startling 72.39mph driven by its designer, a mere 30 seconds ahead of Top Banana, the Ormsby/MacGregor 28ft Catlan Phantom rig with 600bhp averaged a creditable 71.9mph, showing that 1980s designs can still challenge today’s latest stepped hulls for sheer speed, even in lighter conditions.

The promised fleet of historic racers did not materialise due to the usual gremlin – age. However, Thunderstreak, Tommy Sopwith’s veteran 1963 Bertram 31 of Peel/Raymond/Gaggero, employed its newly installed 435bhp MerCruisers to ‘thunder’ into first place in Class 4 (Historic) at an average 53.3mph – declining its time allowance for rendering assistance. Its main competition this season, Hell’s Angels (Peedell/Salter), arrived a creditable four minutes behind. ‘This was formerly Lady Arran’s Hunton Gazelle race boat from the 1980s. She would have been rightly chuffed by her performance today,’ said Nicole Peedell, who promptly passed out through hypoglycaemia once ashore. Shows the dock is as dangerous as the sea.

Perhaps PBR magazine readers might consider the remarkable average race speeds and compare them to velocities of their own craft; then they may understand how the 60th-anniversary races demonstrated that racing improves the breed. There was genius in the first deep-vee designs from the drawing boards of legendary designers like Ray Hunt, Sonny Levi and Don Shead, which shapes the boat you now drive. And age is no barrier, as entrants ranged from 23 to over 80.

Overall, the weekend also demonstrated the camaraderie of the sport, its friendly competitive nature and its gentlemanly sporting behaviour – while racing anyway!

As if to underline the spirit that pervades this wonderful sport, Nicole Peedell’s little daughter Toni approached the author and presented a picture she had done of Thunderstreak, remarking that after her parents’ bright-red Hunton Gazelle, she thought Thunderstreak was the nicest boat in the pits. That painting was pinned to our dashboard for the race – where it will stay as a reminder of a great day’s sport and a wonderful family.

Casualties in Class 4 included the 600bhp Pelham brothers’ Revenger 25, Beaver Returns, who blew an engine and retired at Yarmouth. ‘We tried to catch Thunderstreak down the Solent, but despite having surface drives, one old Chevrolet let us down,’ said Bryan Pelham. The ultra-quick but delicate 1984 1000bhp Severy/White 28ft Phantom Wild Corporate shot ahead at the start but blew an outdrive and retired, as did the 200hp classic Class 3 Clarke/Tait Phantom Da Bomb. The popular Goodwin/Ormiston/Sweeney Velocity 28, Atlas Mr Noisy, blew a gearbox and engine while testing before the race – a sad loss to the event as Allan Goodwin would have qualified as the oldest competitor by a decent margin. The Class 3 Pinder brothers’ new Adam Younger-designed monohull, Pin Her, had engine mount and transom failures and retired. The RIB Renegade Master had attracted the epithet ‘ping-pong ball’ over several seasons for her eccentric bouncing progress around every course, but sadly, this Foster/Morris rig retired too. One bounce too many perhaps? 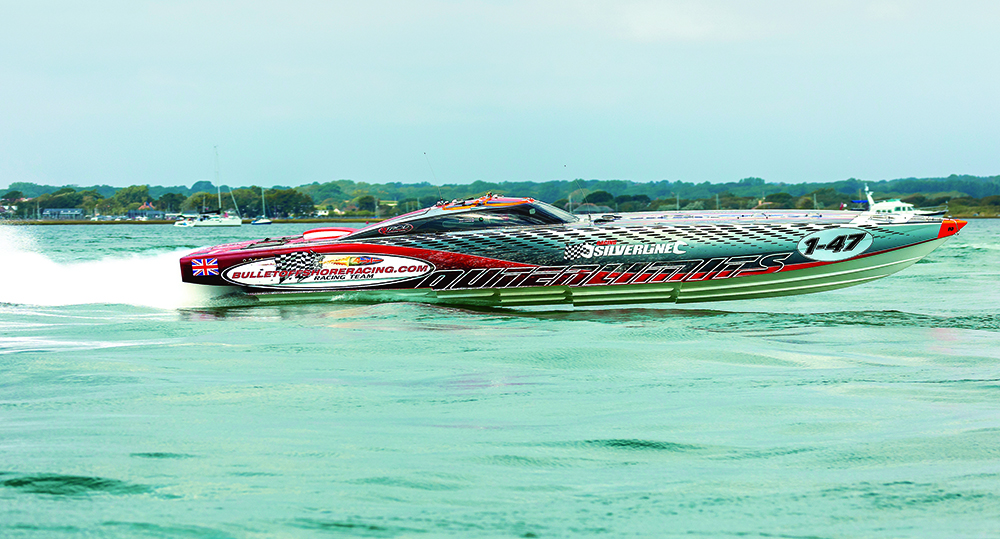