Previously marketed as the Explorer Jet Tender, the all-new Lamont T430 Jet Tender is a whole different boat. Barry Thompson sets out to sea-trial this first of the new breed and determine the T430’s relevance to the wider market.

While the Lamont brand is new to boating, it comes with a heritage that stems back quite a few years. When Andy Lamont bought Explorer Boats in 2018, he inherited a range of RIBs and a fledgling jet tender business.

‘The biggest difference between those earlier boats and today’s models is we have repowered a Yamaha TRI 4-cylinder engine coupled to a Solas 6” jet pump,’ said Lamont. He added that one of the main reasons for the change was to have a universal power platform that any Yamaha dealer around the world could service. ‘We also dropped the twin-driveshaft design for a single shaft, changed to water-feed seals, which are good for 10,000 hours, and rejigged and simplified the whole drive train.’

In addition, the design of the T430 now incorporates a two-stage muffler to help lower the noise levels and stop any water backing up the exhaust. As an extra safety item, a fire suppression system is provided in the standard package. Flushing the engine can be done without lifting the engine cover, and there is an option for an electric shut-off valve to prevent the engine flooding when being towed. 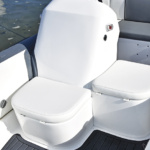 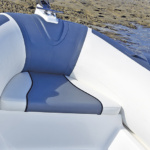 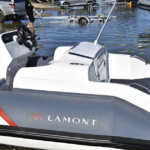 Note the high quality shaping to the stern cones.

The Lamont T430 is offered with a 100hp Yamaha 100 TRI as the standard engine, but you can get a bit more power from the Yamaha 125hp TRI. I’m not sure I would bother, as I found the 100hp unit was more than enough. On calm waters off Omaha Beach, we had the T430 running at upwards of 30 knots.

At first, I found it very flighty and so instantly responsive to any helm movement that I had trouble keeping the boat straight. I even managed to do several unintentional jet spins, but at all times it felt safe and was totally dry. Actually, they were a lot of fun, and after I had familiarised myself with driving the boat (jets have never been my forte), I did plenty more – controlled and intentional. The 100hp offers instant acceleration, and I’m sure it has more than sufficient torque to pull a slalom skier up from a deep-water start.

Previously used as the hull for the Viking jet, the T430 has been lengthened, with longer strakes and a redesigned transom area. The aft deck area has been raised to fit the new engine into the engine space, and the transom platform is also 200mm longer; hence, it is suitable for a cooler to be located, and there is more area for divers, skiers and swimmers. A transom boarding ladder assists in getting back on board. The decking is finished in high-quality SeaDek material, which likewise contributes to both the boat’s aesthetics and its comfort and functionality.

Considering the size of the T430, there is a surprising amount of space and dry storage areas. The full-width aft bench seat hinges up for engine room access, so there is no space for any gear. However, the console offers its share, with all areas under the forward and side seat utilised for gear storage.

The vessel’s control console is reasonably spartan, with a speedo, on and off switches, and a switch panel – mind you, what else do you need in a craft like this? There is also room for a bracket or flush-mounted MFD, a compact stereo and a small VHF.

The bow area features further seating, with a good-size anchor locker beneath. The Lamont T430 is available with an extended bowsprit – or if you have a length issue in your tender garage, it can be changed for a shorter version that gives this model an overall length from the forward rubbing strip to the back of the jet unit of 4.30m.

The Lamont T430 is a versatile craft and a lot more than simply a tender for a big boat. While it will certainly suit a tender garage or on-deck storage (lifting hooks are available), it is also a great little family fun boat, whether for fishing, diving or towing water toys. It’s very neat in design and layout too, which adds to its appeal.

‘While we see good potential for this model within our home market, our main drive for the Lamont Jet Tenders is for export – not only to Australia and the Pacific Islands, but also to Europe and the US,’ Lamont confirmed. ‘I may be biased, of course, but I genuinely feel our boats are far more practical and versatile and offer more space than a good many others in the market. Plus, they represent a good deal more than simply a ship-to-shore tender.’

In summary, it would appear that this little craft represents a versatile option for anyone seeking a sports jet tender – one capable of fulfilling more than simply the role of a ship-to-shore tender. She’s designed with functionality in mind but is aesthetically pleasing at the same time. If you’re seeking a little craft with a good turn of speed, then the jet coupled to the T430 packs a powerful punch, and unlike a prop-driven boat it delivers zero slip and maximum take-up. Jets also provide that additional safety when it comes to water sports and family inshore fun.

This product may be designed and built in New Zealand, but the company has firm plans to export widely, and its home territory itself is highly respected in terms of its boatbuilding history – something Lamont pride themselves on and seek to uphold.