Let’s Get Tied Up!

Paul Glatzel emphasises the importance of seamanship and focuses on various aspects of getting alongside and tying up.

Seamanship is defined as the ‘skill, techniques or practice of handling a boat at sea or in a harbour/marina’ and forms part of every boating course that you will ever undertake. Like anything, though, returning to look at a few of the key seamanship skills we all take for granted is never a bad thing.

If you are heading back after a trip, a key skill to develop to make berthing easier and safer is to be able to lasso a cleat or bollard. It’s a pretty simple skill to develop if you get the technique right and then give some time to practising.

To get set up, tie one end of the line to the vessel. Coil the line into your left hand leaving medium-sized loops – you are likely to have six to eight loops. Separate the loops so you have equal numbers in each hand with a single line dangling between the two sets of loops. Hold your left hand flat and open, resting the loops in your upturned palm. Use your right thumb to secure the end of the line and keep a flat, open hand for the other loops. When within striking distance of the cleat, throw your arms upwards and outwards as if you were pointing to the 10 o’clock and 2 o’clock positions. Hopefully you still have the end of the line under your right-hand thumb! Pull in the line and secure. As with anything, practice makes perfect, so take a line off your boat and practise at home. Just use anything as the target cleat and get lassoing!

But why bother? Let’s just jump! Indeed, visit any marina and you will see plenty of people doing just that. So what are the reasons for using the lasso technique instead? The primary reason is safety. While it doesn’t happen too often, jumping onto a pontoon or dock risks you falling in, slipping or even – as someone I know did – falling between the boat and pontoon and destroying your elbow. Secondly, if you get moderately good at it, then you can easily lasso a cleat from 10–15 feet away – making berthing a whole lot easier. Thirdly, done properly it looks really cool!

To lock off or not to lock off – that is the question!

Thankfully, not too many things in boating generate disagreement, but how to tie off to a cleat can occasionally create some ‘interesting’ discussions. Generally they start with ‘My instructor said you must never do that’.

When tying off to a cleat on a pontoon or dock, there are two schools of thought as to how you should finish off the line. Both methods start with ‘taking a turn’ around the base of the cleat as it is this turn that takes the load of the vessel. Take the line round the base of the cleat so that it starts furthest away from the boat. Both methods then add in a couple of ‘figure of eights’ – it is these that ensure the vessel is going nowhere.

Then the discussion starts! There are two ways of finishing off the process. One method takes another turn or two around the base of the cleat with the line just being left tidy. The other method finishes the last ‘figure of eight’ off by rotating it so that pulling on the end of the line locks it. While there may be some strong opinions on which is right, in my view both work just fine, and contrary to what some have said to me, I have never had a line where the lock is present tighten so much as to be difficult to remove. In short, do what you prefer.

Not everyone, though, ends up tying up alongside a marina pontoon as in many locations you have to tie up alongside a dock wall or jetty. This creates some different challenges, and if you are in an area that is tidal you need to make sure you set the lines to accommodate the predicted tidal changes.

For a smaller sports boat or RIB, when alongside a dock wall the real challenge is ensuring that you are protected from what is likely to be a rough, uneven surface that can easily damage your craft. If the wall is straight, normal fendering generally works fine; otherwise, what you will need is really large ball fenders (pretty impractical on a small craft) or a wooden board to lay outside the fenders (also pretty impractical) or else your own small fenders just won’t afford any protection. With regard to your lines, the key is to set long lines forward from the bow to a cleat or bollard ashore, and likewise from the stern backward. Setting long spring lines will also help the craft stay in position. Judge the length of the lines carefully, as if they are too short you risk hanging from the quay wall as the tide drops and featuring on every boating forum and Facebook group!

When tying a small boat alongside a pontoon it is often possible to tie it up securely using just a bowline and a stern line if the position of the cleats on the pontoon or jetty allows. As a general rule, try to keep the cleat or tie-off point at the rear of the vessel directly adjacent to the cleat ashore, thereby allowing a very short line to be used. Keeping it short holds the vessel alongside the pontoon and prevents too much backward/forward movement. If leaving the craft for any time when poor weather is predicted or where the bow- and stern lines fail to prevent the vessel moving around, you will want to deploy spring lines. You will need to set two spring lines – one to stop the craft moving backwards and one to do the same for forward movement.

With all the lines you set, don’t tie them so that the vessel is held really tightly alongside. Have the fenders touching but allow a bit of movement so that most of the time the craft will float freely, thereby reducing wear in the areas the fenders touch.

Whether you tie to a pontoon or a dock wall, sometimes you will need to moor (raft) up alongside another vessel. If you need to do so, what is the etiquette of tying up, what keeps both vessels safe and how should you cross the other vessels?

It is good practice wherever possible to start by running your own lines to the shore so that the inner vessel’s lines and cleats are not taking the load of your craft. Ensure you factor in tidal changes if relevant when determining line length. Setting spring lines will ensure you position your craft alongside the other vessel so that the fenders can do their job and your craft stays where you intend it to.

When crossing the inner vessels it is good practice to walk through the bow area if possible – and try to never step on the seats, irrespective of what you usually do on your own vessel!

To leave, if you are the inner vessel you will generally want to reverse out. Rig a stern line from the craft outside you, around your bow/console, and put a member of your crew ashore to tend this line. Release the other vessel’s stern line and let the vessel’s stern float out. Reverse out, let your crew sort the lines out, then recover them.

Like anything, getting good at using these techniques comes with practice and a bit of forethought, so get out there and put these techniques into practice, and impress others with your professional seamanlike approach.

Need help? Watch these videos online on our YouTube Channel 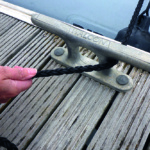