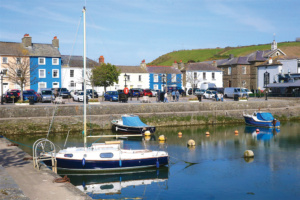 Wales has two majestic peninsulas, Gower in the south and Lleyn in the north. If you follow the broad sweep of Cardigan Bay north from Gower, you will encounter the compact, but perfectly formed, Aberaeron. Lying just a tad south of Aberystwyth, it is a fine gem.

As is often the case around our shores, Aberaeron is a landfall best approached in settled weather at the top of the tide. This is a lovely coast, replete with wildlife, and we have often seen harbour porpoises, dolphins, vast shoals of fish and rich birdlife, all from the cockpit of our own boat. On a hot Welsh summer’s day, it can be idyllic just lying slightly off Aberaeron, doing nothing much in particular. From sea, Aberaeron needs to be tackled about one and a half hours either side of high tide – it should be noted that its entrance dries and there are gravelly banks on either side. It is best to approach square between the low walls of the harbour entrance – the wall to port has a red and white striped spar as its seamark. Once inside, it is possible to lie against the quay wall on the port-hand side of the inner harbour, which dries. Some craft settle immediately behind the sea wall, to starboard, near the harbour master’s building. Ahead lie the trot moorings secured by submerged chains.

Aberaeron is a great place to explore on foot on a sunny day. At the outer harbour wall there is a salty seaside boatyard vibe, with this jumbled area being unkempt enough to feel organic, and just a little bit sleepy. Dinghies scattered on sea-washed turf set the tone, and you are all but guaranteed to like it. Amusingly, near the trailer parking area, the harbour master’s house on the sea wall offers tea and cakes! Mind you, in the old days, the harbour master must have been a busy chap, as we could find at least three buildings in Aberaeron with ‘Harbour Master’ emblazoned on them somewhere! The yacht club can be found here on the sea wall too, and all in all, boating folk will love this nook. 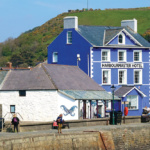 The first hostelry from sea, the Harbourmaster Hotel. 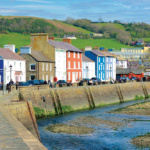 Town side of the outer harbour. 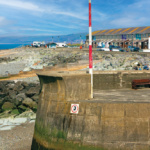 The seamark on the sea wall. Speed limit 3 knots. 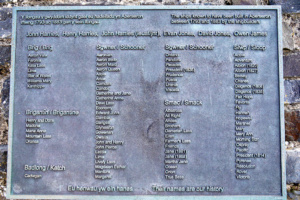 All the vessels built in the Aberaeron boatyards between 1793 and 1883.

When walking around the quays, the remnants of the previous shipbuilding industry can be seen all around you, just waiting to be decoded. An informative bronze plaque lists all the ships built here between 1793 and 1883. Their names alone are hugely evocative: Feronia, Ganges, Dilgence and many more. The local council has clearly spent time, expense and effort on the whole harbour environment, and it is difficult to imagine how it could be better. As previously mentioned, the outer drying harbour floor is much encumbered with mooring chains and beached vessels, and when the tide is out, these stranded boats look like a child’s toys strewn around a drained bath.

The bulk of this handsome and compact Georgian town lies to port, with the main road and church lying up the hill to starboard, wherein a stream enters the drying harbour. Here, a bold and elegantly arched new wooden bridge springs across, linking both sides of this drying harbour. It all adds up to a fascinating outer harbour area. 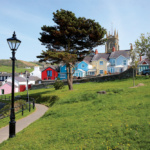 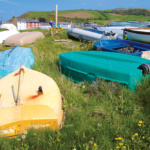 Dinghies strewn on the sea-washed turf! 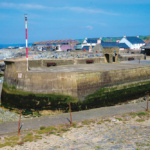 Aberaeron has basic facilities for visiting powerboats. You can launch your boat down the slipway for a modest fee, but it is also possible, for a further reasonable charge, to store your trailer on the hard. You will almost certainly be able to negotiate a mooring for a few days with the harbour master. Mooring and slipway charges are very reasonable, but you need the harbour master’s permission first! If your boat is able to take the ground, Aberaeron is a tranquil place to linger in settled weather. 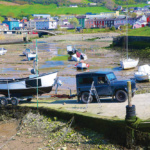 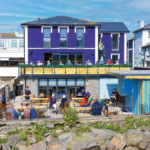 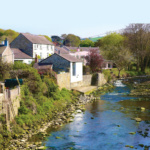 The visitors’ moorings lie in the corner on the south side of the harbour entrance. After entering between the stone piers, when you reach the end of the wall on the starboard side, turn hard to starboard, go round the end of the wall and then hard to starboard again. If you intend to stay, your vessel will once again need to be able to take the ground. Local boaters told us that it can get uncomfortable in the outer harbour in some westerlies since it is not as sheltered as it appears.

There is no shore power, so water has to come from the harbour tap on the yacht club wall.

These are situated in the yacht club building on the sea wall, and the harbour master can supply the entry code you require.

There is no alongside fuel berth at Aberaeron; however, luckily for we trailer boaters and hairy-chested ribsters, there is a petrol station in Aberaeron that is open until 8pm from Monday to Saturday, and 7pm on Sundays (you will need your cans, by the way). Most usefully for cruising boats, Calor and Campingaz (907) refills are also available.

If you walk up to the main road at the head of the harbour, there are enough shops for essential revictualling – not to mention a good chippy!

Cambrian Marine is about a mile to the north of the town up the main road.

HW Aberaeron is HW Milford +0140 and is about 2m less than Milford. The harbour dries at LW and is only accessible 1.5 hours either side of HW. 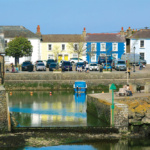 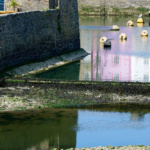 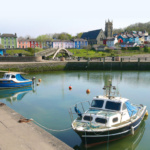 There is no railway station in the town; however, there are daily bus services both north and south.

Aberaeron is located between Cardigan and Aberystwyth on the A487 at a junction with the A482 leading south-east to the university town of Lampeter. It lies on the celebrated Ceredigion Coast Path, part of the Wales Coast Path.

Aberaeron lies on the northernmost point of the MOD Ceredigion Offshore Gunnery Range. A listening watch is recommended on VHF 11 and 16, and full details are available on the MOD website.

Boats make passage from Aberaeron over to Ireland or down to the famed Pembrokeshire Coast to South Wales, Devon and Cornwall. Aberystwyth is barely an hour’s cruise north, while a day’s cruise further to the north will yield Barmouth, the Lleyn Peninsula, Abersoch, Pwllheli, Porthmadog and Mochras Lagoon. Even closer to the south lie Aberdifi (Aberdovey) and New Quay. 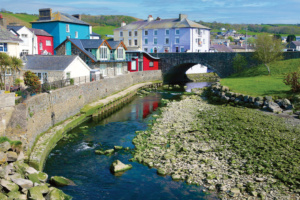 River Aeron up to the main road bridge.

Aberaeron is an astoundingly well-preserved Regency port – its fine Georgian houses with their pastel colours and beautiful proportions surround a stately stone dock. The town was the brainchild of a visionary cleric, the Rev. Alban Thomas Jones Gwynne, who in 1805 commissioned Edward Haycock, an architect from Shrewsbury, to plan the town and harbour. Aberaeron grew and thrived as a port, as well as supporting a substantial shipbuilding industry, in the 19th century. Such a town is unusual in this part of Wales due to its planned construction as a port, and also because of the acknowledged quality of its buildings. Indeed, some of the architecture was of sufficient interest to feature on British postage stamps. Most of the town now consists of listed buildings, and when walking around, one is transported back into a Georgian time capsule. Although this was a new town, built from scratch, it did have one noteworthy antecedent, as ancient lays tell of a fortress called Castell Cadwgan, thought to have been erected by King Cadwgan close by. This was supposed to have occurred around the year 1148; however, Cadwgan is also recorded to have been killed in 1111! Still, it’s a good story. In latter days, 1511 squadron Aberaeron Air Training Squadron was sited at the harbour, as recorded by a modern stone. Also recorded in stone on a small vantage point on the harbour is a plaque from 2007 renewing the gratitude of the people of Aberaeron to their founding elders – a lovely intergenerational touch. 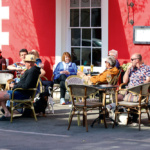 A great way to gongoozle away a hot afternoon in Aberaeron. 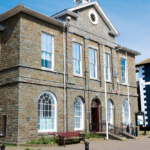 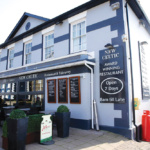 Over the years, the town has attracted numerous famous visitors and residents. The renowned Welsh poet Dylan Thomas had connections with the town – and no doubt its pubs. Furthermore, Sir Geraint Evans, the noted opera singer, had a home in Aberaeron for more than 30 years. Most of the population of this small Welsh town can speak Welsh, though in summer, Aberaeron is a honeypot for visitors of many tongues. Speaking of honey, the production and sale of honey and its by-products are associated with the town, and today, The Hive continues this tradition right on the quay wall.

The jewel in the crown of Aberaeron is her Georgian inner harbour. Although the outer harbour dries, the handsome inner harbour right in the town has a cill to retain water. Boats afloat in a pretty harbour with quay-lined noble residences make a very picturesque setting. The welcome selection of handy pubs – plus a rather interesting choice of restaurants – only adds to Aberaeron’s allure. You can drink and dine well while conveniently appraising all this rational Georgian harmony. At full tide, you can motor through the outer harbour seeking the small entrance to the dock lying ahead, up to port. It should be noted, however, that there is only a narrow gap through which to enter the dock, so boaters must proceed very slowly and cautiously to make the sharp final turn over the retaining cill. 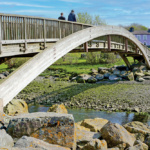 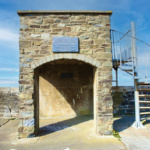 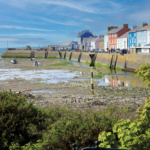 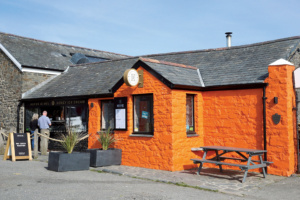 The town has long been associated with honey: Hive Honey Ice Cream.

You should have no problem finding your ideal place to eat or drink in Aberaeron, and there are hostelries to suit all pockets, with everything from pub grub to surprisingly classy fine dining. First off on the outer harbour quay is the imposing blue and white (Michelin quoted) Harbourmaster Hotel. Further in, one comes to a selection of fine eateries with good wine lists and terraces overlooking the harbour. We chose Y Seler for a fine lunch at a very reasonable price and were not disappointed; however, different people we talked to unsurprisingly all seemed to have their own favourites. This is a good sign and means that local competition has improved the breed! Tripadvisor is worth a look if you fancy a particular kind of cuisine, and we reckon that you could spend a week in Aberaeron and dine well in a different restaurant every night, which is impressive for such a compact town. We also noted that with its fine and safe beach, all the traditional seaside activities available would suit a younger crew.

There are not many places around our shores where you may take your own boat into a Georgian town square inside an essentially intact Regency port, but Aberaeron is one such landfall, and one that should not be overlooked. 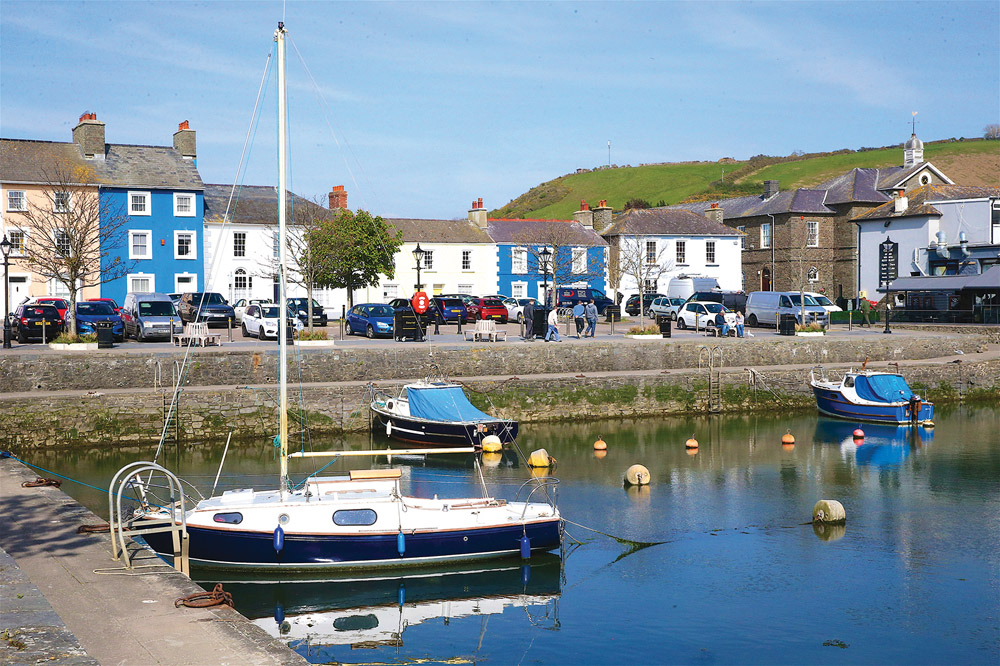