Greg Copp reports on a craft that is new to our shores and with a DNA that is blatantly Finnish. 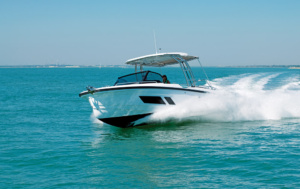 I have often joked that just as there is a ‘Purity Law’ in Bavaria, forbidding the brewing of substandard beer, in Scandinavia, similar legislation prevents the construction of substandard boats. The truth is that Scandinavians take boating nearly as seriously as Bavarians take beer drinking, which Quarken’s new T27 tends to prove. At the moment, this relatively unknown Finnish company builds just three models: the 27 Open, the 27 T-Top and the 27 Cabin.

You do not really need to be told that this craft hails from the Baltic, as it’s rather obvious from its appearance. The dagger-like vertical-stem bow, twin-stepped hull, high bulwark-enclosed side deck and driver-focused helm are all very much in keeping with other Baltic boats, and the fit and finish is of a high standard. Looking behind the scenes reveals no gremlins, not even in what is one of the first T27s in the UK. The bow locker is perfectly lined, as is every other locker throughout the boat, while the external gelcoat is superb and all the stainless work is of a similar standard.

Stepping aboard is quick and easy thanks to a deep full-beam bathing platform, covered in thick SmartDeck synthetic teak decking. This area is focused around the optional waterski pylon, which sensibly wraps around the engine. The deep transom bench seat, which simultaneously provides seating facing forward and aft, can have its seat backrest folded forward, creating a triple sunbed. Storage sits below all the cockpit seating, and under the transom sunbed/seat are located the system switches. This storage section is by far the largest, and it can either be accessed at its forward end from the cockpit or its aft end if you are on the bathing platform dripping wet and want to drag out an inflatable.

Cockpit innovation does not stop at the aft seating, as the cockpit table can be set in a lower position to extend the sunbed even further. If food and drink is the order of the day, then the two helm seats can be turned to face the table, thus providing seating for five at a squeeze. Cold refreshments can be kept in the 30L slide-out fridge that sits beneath the navigator’s seat. However, I was told that a galley option may be in the pipeline, which will be a good idea, as a 30L fridge can only store so much. 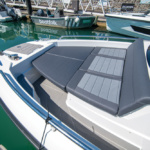 Like the cockpit, the bow can be configured for sunbathers. 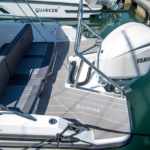 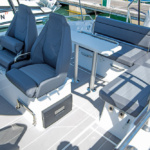 Synthetic teak runs throughout the boat.

The GRP T-top is pushed out the full breadth of the beam and is supported by the stainless work that mounts on either bulwark. Quarken did not follow the often used concept of locating the roof supports inboard, as favoured on many centre-console boats for aesthetic reasons. Apart from greater rigidity in the roof, placing this steelwork on the limits provides more internal space when the cockpit covers are zipped in. When connected to the rear canvas roof extension, the whole cockpit becomes a large extension of the living space. The foredeck is only slightly less innovative than the cockpit, boasting a triple sunbed that with the removal of the forepeak cushions becomes a bow lounger complemented by a table. Under this lounger is a large escape hatch that opens directly into the cabin below, which being a front opener means you can have a cooling airflow running through and up to the cockpit.

The helm is an asymmetrical design, so you get a wide side deck on the port side. Grab/fender rails run along the top of the tall bulwark, which I was surprised to discover are an extra at over £600. Below decks, the T27 sports a long double V-berth, which for most will provide comfortable weekend accommodation. There is also a sink, storage and an electric toilet complete with holding tank, as well as a curtain that separates the toilet section from the rest of the cabin. There is sufficient headroom in the aft part of this cabin for getting undressed, but fitting in a separate heads compartment would not have been realistic without a substantial redesign. There is a transom shower, part of the £5,000 ‘Weekend Package’, which also includes the toilet, shore power, freshwater system and the Dometic drawer fridge. 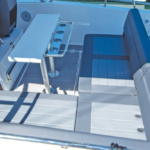 The cockpit configured for cruising 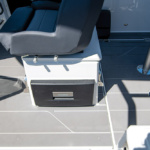 The 30L Dometic fridge sits under the navigator’s seat. 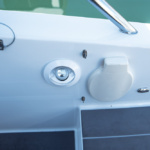 One of two manual bilge pumps, as well as electric. 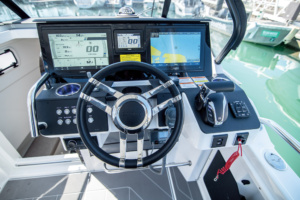 Behind the helm you have the choice of either one or two Garmin 12in MFDs. Having a second display is part of the Premium package, and worth having. With Yamaha’s engine display sitting centrally, and the two larger displays on either side, you can take on board all you need to know in a glance. The dash itself is black, thereby eliminating white glare, and a wireless phone charger sits in a horizontal recess just in front of the wheel. All primary switches can be found conveniently on the port side of the wheel, and the throttle and Bennett trim tab panel are perfectly to hand on a dash extension.

The helm position is quite elevated, so you do not feel the need to stand, especially as the super-comfy Silvertex-upholstered bucket seats hold you where you need to be, and a footboard provides that extra leg support/tension if you need it. Powering up onto the plane creates no discernible bow-up attitude, so visibility over the bow is very good. The boat runs level with near-perfect fore and aft trim, requiring around 30% trim at its maximum speed just shy of 44 knots. Unless you are running with a noticeable beam sea, the trim tabs are effectively redundant. The T27 can cut some impressive sports boat-like turns, with its twin-stepped hull hanging on no matter how hard you push it. The steering is light and responsive, providing plenty of feedback, and never giving the impression that you could inadvertently overcook it. 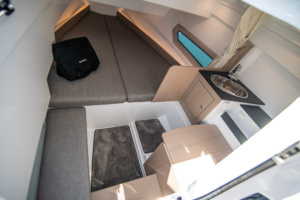 We had a fairly calm day, so I was limited to crossing ferry wake trails, or the confused wake of other boats, to get an idea of how the Quarken deals with the conditions in which it was forged. Running through two steep ridges of water at 35 knots revealed just how sharp the forefoot of the T27 is – so much so that I had to then try it at 40 knots, with the same reassuring result. The bow showed no tendency to reach for the sky, and the hull uttered not a single complaint. Running in and across the wake of a large planing boat, I expected the slim bow to try and bury itself as we met a trough of confused water, but this was not the case.

In terms of cruising, I was surprised by the Quarken’s relatively high sweet spot. The Yamaha F300 will start to produce maximum torque around 3500rpm, so around 3700 in the low 20s is where I would expect this boat to be most frugal and settled. However, 4200rpm at 32 knots is where it wants to be, returning 2.7nmpg and feeling very composed in the process. Clearly, once past 4000rpm at 27 knots, the hull starts to develop quite a bit more lift and comes into its own.

The Quarken T27 is an impressive boat, and all the more so because it does not have a series of earlier siblings from which to garner design experience. It is a perfect driver’s boat – once you get behind the wheel you will be reluctant to step out. It also dots all the i’s and crosses all the t’s, as its wealth of features mean this vessel will appeal to a wide range of crewmembers. It has a fairly broad array of upgrade packages, most of which you would be hard-pushed to ignore, so the lowest realistic cost of the T27 is pretty much as tested.

For those that want a more all-weather boat, there is the Quarken 27 Cabin. Running on the same deep-vee twin-stepped hull, this craft is also powered by a Yamaha F300 and has the same forward cabin layout. Its wheelhouse/cabin has an aft bench seat, a sunroof and a larger fridge, while the helm design and seating are the same as those of the T27. 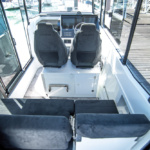 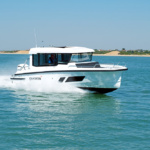