E1’s electric foiling raceboat has taken flight for the first time on the River Po close to San Nazzaro in northern Italy, with the RaceBird prototype successfully completing a series of tests and performance runs with ex-powerboat champion Luca Ferrari behind the wheel. 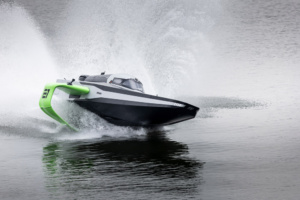 The RaceBird engineers conducted a number of technical tests and system checks to assess the overall performance and reliability of the boat and the various electrical components.

The testing schedule, which will continue for several weeks, will consist of straight-line tests, qualifying runs and race simulations, with the focus on set-up and performance analysis and gathering data on the foiling and handling characteristics in different racing conditions.

The single-pilot RaceBird vessel is the brainchild of Norwegian designer Sophi Horne and was co-created together with Brunello Acampora and the expert engineers at Victory Marine and SeaBird Technologies. The RaceBird is powered by a 150kW Kreisel battery and an outboard motor produced by Mercury Racing.