Fast, sharp and intuitive to use, Cyclone stretches your horizon. Greg Copp considers whether Raymarine’s new Cyclone radar is likely to go down a storm … 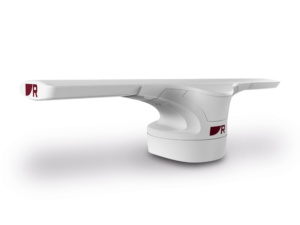 The 4ft array will likely be the best option for most middleweight boats.

Situational awareness is often what weighs the most on any skipper’s mind. It exists at all levels, from day-boating on a clear day to crossing the Channel on a dark night. New advances in technology have made this easier – most recently Raymarine’s new Cyclone radar. Thanks to a collaboration between Raymarine and Will Parkinson with his Raymarine-equipped Smartfish 25, PBR was able to see how Cyclone panned out on the water.

Solid-state radar has been with us for a few years now, but with Cyclone and their range of FLIR thermal imaging cameras, Raymarine have created a commercial-spec system that caters for boaters at all levels. Available in 3ft, 4ft and 6ft arrays, this system is unmatched in terms of size and weight. The 3ft Cyclone weighs in at just 23kg, making it suitable for craft that would otherwise have to rely on a smaller, less effective dome radar. This array is also just 335mm (13.2in) tall, making it the shortest open-array radar available at the moment. Like its bigger siblings, it has been subjected to wind tunnel testing, providing it with aerodynamics capable of dealing with 100-knot winds. A maximum 60rpm rotational speed provides accurate tracking of up to 100 automatic radar plotting aid (ARPA) targets in real time – even with a vessel at high speed. Precision radar imaging comes courtesy of CHIRP pulse compression and beam-sharpening technology, providing high-quality target separation and accurate long-range resolution.

Running south down Southampton Water, Cyclone clearly picked up two buoys off our bow – the furthest at a quarter of a nautical mile – with the bearing to each shown by a blue line. Had it been night-time it would have been easy to have picked our course around them, while the coastlines and structures on either beam stood out clearly. AIS-equipped craft are shown by vessel icons, and anything moving can be easily identified through ‘Doppler’. Doppler target tracking has been taken to a new level. Able to identify between stationary and moving targets, it displays vessels that are moving towards you in red, and those moving away in green, while land mass and stationary vessels/objects are grey. 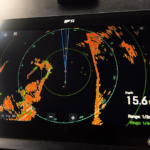 The two buoys on our bow were easily identified. 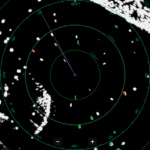 Doppler identifies targets moving closer in red, and those moving away in green.

Cyclone’s professional-grade ARPA uses the latest technology developed for the US Coast Guard. ARPA automatically identifies targets within user-defined parameters, or through specific manual selection. Course and speed can then be plotted and displayed, with the ability to provide an alarm if the specified vessel comes within a certain distance or specified area. Imagery has been substantially sharpened and ‘proportioned’, insomuch as moving vessels do not present the confusing and slightly oversized signatures that are often the case. 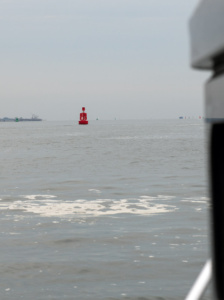 How the two buoys appeared to the naked eye in daylight.

To achieve this degree of radar imaging, Raymarine use what is called a ‘dielectric antenna’. In a traditional slotted waveguide antenna, a ‘horn flare’ is used to define the vertical beam width, which in the case of most marine radars is typically 25 degrees. This beam width is chosen to maintain an effective degree of performance in rough weather. The horn flare is an internal metallic structure that guides the beam in the vertical axis. Consequently, an aperture of around 90mm is needed to achieve the required beam width. By contrast, the dielectric antenna uses a piece of dielectric material in front of the slotted waveguide, defining the vertical beam width. Dielectric material is a material in which microwave energy travels slower than it does in air, and therefore, due to the process of refraction (in a similar way to how glass bends light), it is able to focus the radar beam. In this case, it is possible to use a relatively thin sheet of dielectric material to achieve the required vertical beam width, and therefore the physical height of the antenna can be little more than the height of the waveguide itself. The benefit is that the dielectric antenna has a profile of around a third of a traditional radar antenna, and this reduces aerodynamic drag. This, in turn, improves rotational accuracy in high winds and on high-speed vessels, while also reducing power consumption.

With Cyclone, you can simultaneously enjoy maximum visibility of near and distant targets, using Raymarine’s RangeFusion technology – viewed on any of the Raymarine Axiom MFD range. RangeFusion merges short-pulse near-target ranges with long-pulse distant target ranges, providing a single radar image. This combines short-range with long-range detail without compromising image quality, which would otherwise be the case without RangeFusion. Alternatively, you can have a split-screen display, showing short- and long-range radar images separately, enabling you to zoom in on the short range for those crucial navigational details. If you have twin MFDs, each screen can show each radar image, giving you the perfect picture out to 96 nautical miles with the Cyclone Pro version. Rotational speeds are 12rpm, 24rpm, 36rpm, 48rpm and 60rpm, and the system will automatically adjust speed in accordance with both the range and the maximum speed required. For example, the maximum of 96 miles can only be achieved with rotational speeds of 12rpm and 24rpm, due to the time taken for the radar transmission to travel 192 miles to and from a target, and the slower rotation speed will achieve a more substantial image. If you require a fast rotation speed – for example, in congested waters on a fast passage – Cyclone will automatically limit the range accordingly. If you are utilising RangeFusion, rotation speed is reduced to accommodate the maximum range chosen and system processing. 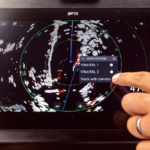 Thermal dimension: picking a target for the camera to track. 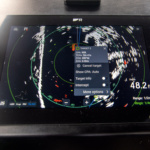 Thermal dimension: with the target selected, more information is available.

Bird Mode fishing intelligence identifies distant flocks of seabirds above schools of fish. Bird Mode intelligently optimises radar gain and sea clutter controls to target seabirds in detail, so anglers know the best fishing locations. This feature was used to great effect recently by Will Parkinson in his Smartfish 25, to win a major fishing trophy with a £50,000 prize.

Raymarine’s FLIR camera range offers the serious navigator the option of thermal imaging. Thermal imaging – or TI for short – identifies the heat signature of any object and works equally well day or night. The beauty of it is that Cyclone can be used to rapidly target any object with TI – be it a buoy, a dockside or a vessel – by tapping the object’s signature on the screen. I got to see this in action in Southampton Water on several occasions. A quick tap on the MFD highlighted the proposed target, and a second tap brought the camera onto the target, followed by its image on the overhead screen. The camera kept the object in view until it was cancelled. If you use a boat in all weathers and at night, this technology is well worth considering. 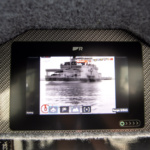 Thermal dimension: the camera picks up the Red Funnel ferry. 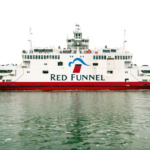 Cyclone is engineered to international commercial standard IEC62388, meaning it fulfils the requirements of commercial-shipping radar. For this, Cyclone needs to meet the standards required in terms of performance, sensitivity and beam angle, among other things. The Cyclone range offers six high-power solid-state options for long-range and all-weather performance. Two levels of Cyclone performance are available in 3ft, 4ft and 6ft sizes: Cyclone with 55W/6kW equivalent magnetron performance, and Cyclone Pro with 110W/12kW equivalent magnetron performance. 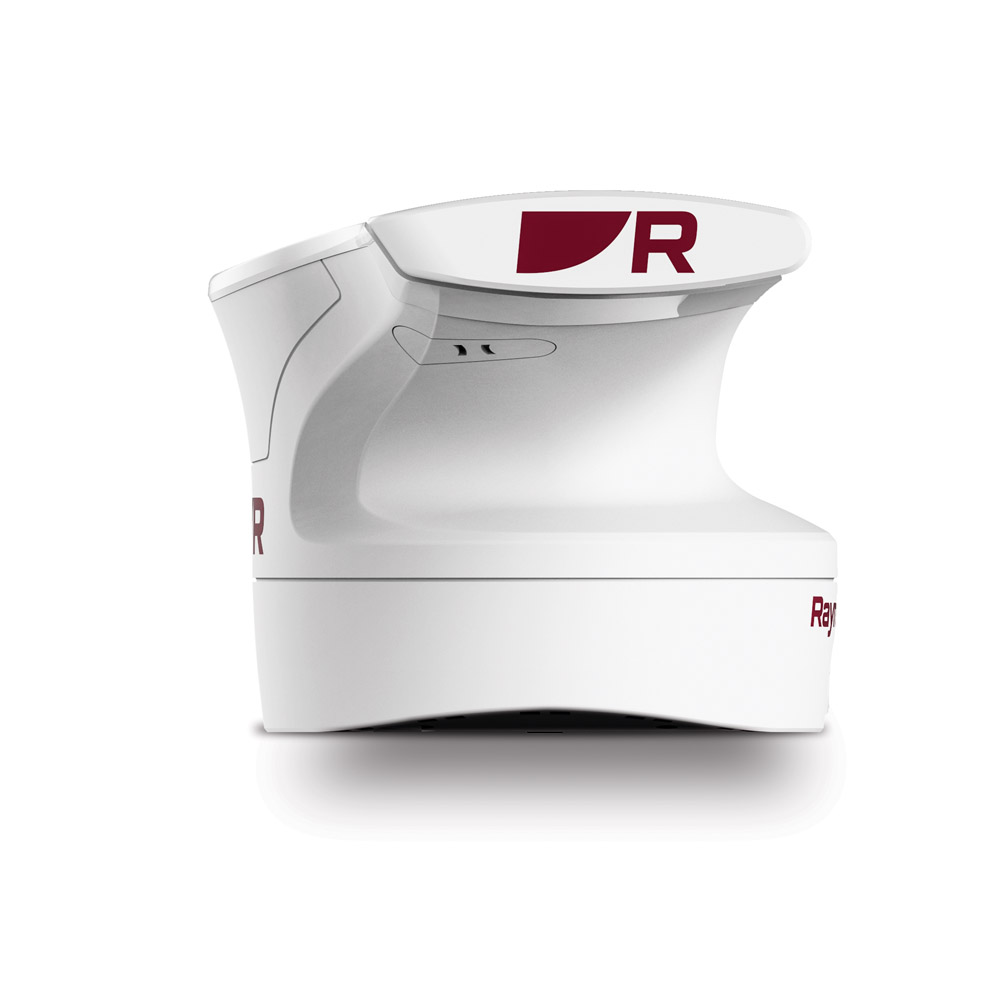 All arrays enjoy a low profile.