Redesigned from the keel up, no stone goes unturned with Sargo’s new 28, as Greg Copp reports … 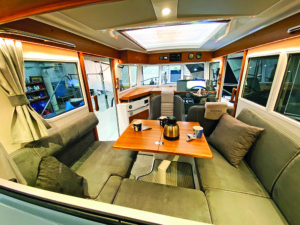 The wheelhouse is generous in size.

With Nordstar’s recent launch of their new 28+ (last issue of PBR), it seems our Finnish friends are keen to reinvent their middleweights. Sargo’s new 28 is a perfect example of taking a proven concept and making it better. In this case, they have started with the keel and worked up, insomuch as this boat has a new hull. They haven’t simply extended the old hull mould to make a slightly longer hull, as is often the case, but started afresh with a new design. The new 28 hull is 40cm longer and 4cm wider in the beam, has an increased transom deadrise angle from 19 to 19.5 degrees, has slightly softer chines, and has marginally softer and shorter spray rails. The aim, not surprisingly, is to improve seakeeping, while providing a softer ride and an improvement in efficiency. When Minor Offshore were rebranded as Sargo in 2013, some of their boats went through various hull tweaks, and the Minor Offshore 28 was one of them. In that instance, the new Sargo 28 had the same hull lines as its Minor predecessor, but the chines and spray rails were ‘softened’ slightly. This must have been judged to have had some benefit as the same concept has been used in this boat.

Internally, things are much the same, and given that the accommodation interacts with its component pieces, this makes good sense. You get a double master forepeak cabin, with a heads immediately aft, a wheelhouse galley up top and a credible mid cabin. The master cabin is the usual V-berth set-up, with an easily accessed storage compartment beneath the bed. This is simply reached by opening a hinged section at the foot of the bed, instead of the usual clumsy arrangement of having to move the mattress sections – and true to form, it is lined internally. You also get a port-side cupboard and an open hanging locker – ideal for oilskins. The mid cabin was better than expected, especially as all I had to do to gain access was fold up the section of the U-shaped settee covering the step-down opening. You do not need to be a contortionist to use this area, though the double bed is only long enough for 6ft adults. The bottom part of one side of the bed has a removable section, providing leg space if you want to sit down when getting dressed. There is a lined storage cavity under the step, and a cupboard on the port side. 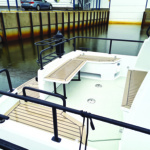 The synthetic teak topping is a sensible touch. 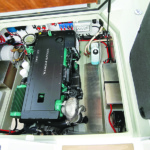 Engine access and the engineering are of the highest standard.

The Scandinavian wheelhouse design generally tends to be a jack of all trades. A lot needs to be packed in, and you often find that one aspect will compromise another – it is a case of getting the best balance. What works well with the Sargo 28 is putting the navigator and helmsman’s seats together. Apart from giving the navigator a good view of the large Garmin MFD, it enables easy access down to the mid cabin and out onto the port-side deck – now enhanced by larger wheelhouse doors. It also means you can get to grips with the galley-up design more easily by not having this seat in the way. These galley set-ups are unusual insomuch as they spread the galley around the wheelhouse, which has the sink and double hob next to the companionway, with storage and a hinge-out waste bin beneath. The fridge sits under the navigator’s seat with a below-deck storage compartment next to it, while the crockery drawer (complete with Sargo crockery) slides out from under the helmsman’s seat. This particular boat also had the optional microwave beneath the saloon settee. This is a fairly reasonable galley suite, it just does not enjoy the convenience of having the ‘easy kitchen ergonomics’ of a potentially less equipped one-location design. The saloon part of the wheelhouse comprises the usual U-shaped settee, centred on a table. Unlike many similar boats, the table does not have a ‘through pole’ connecting with the coachroof, which takes away from table space. Instead, it has a detachable mount, enabling it to rotate through 180 degrees so the table hangs over the rear seat. Alternatively, it can be folded in half or completely removed – ideal for passages with a full crew complement. 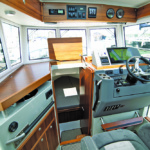 The tall panel above the windscreen enables the use of large instruments. 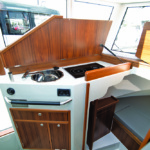 The main part of the galley. 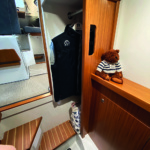 The forecabin has the benefit of storage and hanging space.

Deck duties are a breeze with the wide side decks, tall bulwarks and the larger side-door design. I have often found with wheelhouse boats of this size and even larger that the doors are a touch on the narrow size, sometimes making access a bit of a ‘knee knock’ on a lively day. The foredeck is the same design as the previous 28, leading to a pulpit and a deep anchor locker, with all hardware black powder-coated in typical Sargo style. The cockpit has three lined storage lockers, which like the transom bench seat are covered with synthetic teak. Engine access is easily accomplished by standing on the port quarter and pulling up on the transom bench to raise the cockpit floor. The supporting gas strut does most of the work, and you are then presented with Volvo’s latest incarnation of the D6, surrounded by some clinically neat engineering. There is plenty of space around the engine to get to every service item, with texturised stainless deck sections on either side. With the new 28, Sargo have not felt the need to provide a new contemporary helm set-up. Consequently, you still get an old-school wheel complete with a short vertical handle – ideal for lock-to-lock turns when berthing. Otherwise, the Garmin-equipped dash, complete with Mente Marine automatic trim tab control, works well. The bucket seats, equipped with flip-up bolsters for standing and a footboard, give you the best of both worlds. Nothing is a stretch, and with such an expanse of window space, the only blind spot is the mandatory ‘port-side blackout’ caused by the coachroof when turning hard to port – something most planing wheelhouse boats suffer from.

Performance from the single 340hp engine is fairly reasonable, though this is not really the best option, unless you feel that you rarely need to exceed 30 knots. The bottom-end power delivery of the 5.5L D6 is always impressive, but once you push up into the late 20s you appreciate why the 380hp D6 is considered the ideal middle-of-the-road choice with its 37-knot potential. There are 270hp and 320hp D4s on the menu, but I doubt many will choose them. What does make sense is the 40-knot 400hp D6 Sargo 28, and the soon-to-be-announced 440hp D6-powered version, which Sargo will have launched by the time this goes to print. However, this boat still provides a rewarding driving experience with 340hp, as the ride is superbly soft. How much the new hull design has enhanced this is impossible to say, but you will need to be pretty reckless to get the boat to complain, as she cuts through steep ridges of water with ease. Coming down into the confused troughs of water that often hang around Calshot, made all the more interesting by the frequent passing of the ferries, is always a good test, and the 28 comported herself well. 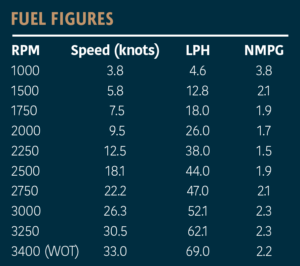 This boat can carve some incredibly tight circles, ably assisted by a light, balanced and responsive steering system, giving it a sports boat-like dimension should you want it. Life behind the wheel is enhanced by the Mente Marine automatic trim tab control system. Coupled to Bennett trim tabs, this set-up, courtesy of a roll sensor, rapidly adjusts lateral as well as fore and aft trim, while its LED panel tells you what it is up to. It helps to get the boat up on the plane around 15 knots, but where you feel the benefit is running with the weather off the beam and bow. I would have expected a fairly tall 28ft boat to have made a nagging case for leaning into the wind, especially as the wind picked up during the day, but Mente Marine took care of that problem.

This is a type of boat that changes very little over the years, and when it does, the improvements are small, often driven by technology or the product of retrospective experience. In this case, technology in the form of later-generation engines and a new hull design has made the new Sargo 28 even more capable of stretching the horizon than its predecessor. More power does not always equate to more fuel consumption, unless you feel a need to use all or most of that power all or most of the time. The more powerful 400hp and 440hp D6s driving through Volvo’s latest DPI sterndrive will prove more frugal at like-for-like cruising speeds than the lower power options, and I don’t doubt will enhance this boat’s popularity.