This rakish RIB offers a wealth of features, and a level of performance rarely found in a 7m boat.

Athens-based Salamanis Marine, with their history stretching back over 30 years, are a company well established in their local waters as a benchmark in high-performance RIBs. However, in recent years we have seen their designs become more popular in other waters, and their newly launched Blade 7 is a boat that looks destined to raise some eyebrows in the ever-hungry UK RIB market.

At 7m, it is that perfect size – not too small to be unseaworthy offshore, and not too big to tow, berth or dry-stack at an affordable price. It also does not need a lot of power to hit the 50-knot barrier, as Mercury’s punchy lightweight V6 200hp reaches a claimed 53 knots, while Suzuki’s 4-cyilinder DF200 apparently pushes the Blade 7 to 50 knots. There is also the option of a 150hp Mercury PRO XS, which, being a great performer for its output, has it running at 48 knots, and Salamanis claim that this boat can plane at as little as 10 knots.

The hull is a deep-vee non-stepped design.

The hull is designed by Adam Younger of K4+, a UK company well known for the performance and efficiency of Adam’s double-chine convex designs, which the Blade 7 uses. Performance figures provided by Salamanis Marine show the Blade returning 0.9L/nm (5nmpg) at wide open throttle with the 200hp Mercury, while the Mercury PRO XS achieves 0.8L/nm (5.7nmpg). The hull is a non-stepped deep vee, with a transom deadrise angle of 23.5 degrees – sharpening to a dagger-like 55 degrees in the forward section of the hull. It has a hard bow, which, apart from giving the boat more substance when hitting large head seas, provides a secure location for the standard-fitment electric windlass, anchor and chain. High-quality materials, notably isophthalic gelcoat and resins, are used in the construction of the hull, while the sponsons are made from Orca 1.670 dtex. The deck is self-draining, which is always a good idea in a fast offshore boat, as are the anatomical helm seats and the tall weather-protecting console, complete with carbon fibre dash. The rear U-form aft sofa seating can convert into a flush area 1.3m long by folding it flat to meet the table. It also has a lot of other standard equipment that you would normally be shelling out for, namely a transom shower, auxiliary outboard bracket, Silvertex upholstery, twin battery system, and bow and stern tables. 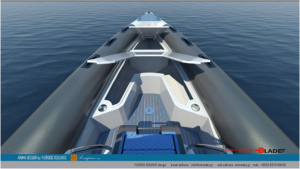 Loads of storage in the bow.

There is an interesting extras list – in particular, you can specify a heads compartment in the front of the console, which is always a good idea, plus cool box, covers and bimini. For those that want to take the Blade 7 to the next level, there is the Blade 7 Carbon Edition. This version has carbon fibre in the bow and stern sections, shock-absorbing helm seats, a Simrad GO9 electronics package, underwater lights and an MP3-USB sound system. There are also two other notable extras available to both models: Eva Faux Teak/Synthetic Teak, and an electrohydraulic outboard bracket with a 5in setback and a 6in vertical travel range – just what is needed for fine-tuning the boat for maximum efficiency and performance. 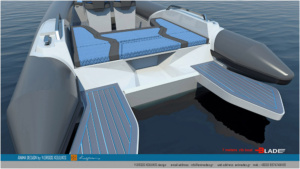 The long bathing platforms are a novel concept in a RIB.

If you want a Blade 7, at the moment you can only buy from the yard direct, which they will certainly facilitate. This does tend to have a price advantage, but it means a flight to Athens. This may change soon with a UK dealership, but this is to be confirmed.

When needed, there is plenty of sunbathing space.