With over 100,000 visitors and six locations, the recent 2022 Miami International Boat Show displayed some of the world’s most impressive powerboats and delivered millions of dollars of business for the global marine trade. TMS headed out in partnership with PBR media sponsor, leading boat transportation logistics provider, Legend Yacht Transport, to get among the show’s offerings, and reports here on his findings. 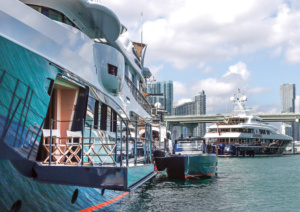 The 2022 Discover Boating Miami International Boat Show, to give it its proper title, was a huge success by anyone’s standards upon returning to the Miami Beach Convention Center and Downtown Miami for five days of boating and yachting excellence. As the largest outdoor boat and yacht event in the world, the show welcomed over 100,000 visitors and featured more than a thousand highly sought-after boating and marine products, generating big business for the recreational boating industry. It is notweworthy, however, that despite its extraordinary size and international import, this world-leading marine exhibition takes place over just five days! Could our own UK boat shows learn from Miami’s example in this regard?

The 2022 event was the first iteration of the Discover Boating Miami International Boat Show – a joint production between Informa Markets, the National Marine Manufacturers Association (NMMA) and the International Yacht Brokers Association (IYBA). Its aim? By combining the Miami International Boat Show and the Miami Yacht Show and SuperYacht Miami, the goal was to create one seamless experience for exhibitors, customers and the marine industry at large. In this regard, from what we could tell at least, it appeared to more than deliver on all these fronts. 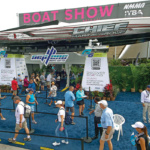 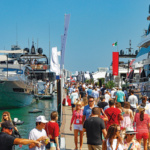 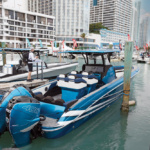 Stars of the show

The PBR team was there in full force, filming and testing craft and generally taking up every opportunity offered to them. The schedule was punishing but highly productive, providing us with some outstanding footage and material, some of which you’ve likely already seen being showcased on our PBR social media channels. The team was treated superbly by our US friends and we were allowed first access to many debuting craft as the only European press on board. 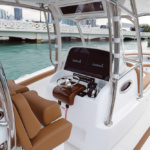 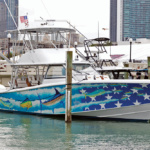 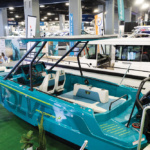 Our selection of key ‘standout craft’ included, but was by no means limited to, the superb Boston Whaler 420 Outrage powered by two 600hp V12 Mercury outboards. TMS took the wheel of the 11,000lb 1800hp GT and described the craft in its 50th anniversary as the ‘Bentley of the sea’. Mastercraft displayed their latest water sports creation, a craft propelled by the world’s most powerful ski boat engine, the mighty and highly revered Ilmor. Statement Marine had a run of incredible high-performance centre console craft on display – a type of craft that shows no sign of waning in its popularity with the US home market. Freeman Yachts had their 34VH displayed afloat – a vessel possessing a cleverly designed stern platform mounted between its twin-engine installation. Fugu, previously tested in PBR Issue 172, were showcasing their 29 model with its Petestep hull design for the first time in the US. The illustrious Windy were present too, representing the Nordic climes in fine style via their US representative, Nautical Ventures. Here at the 2022 event, Windy chose to showcase their all-new outboard model with a pair of mighty 600hp Mercury motors. Very impressive! Finally, for a sumptuous dose of speed, and being joined by world champion racer Steve Curtis, the PBR team hit the water with the all-new Outerlimits SC37, powered by a pair of 450R outboards. In true Miami style, TMS, employing his race-trained driving skills, helmed the boat at an impressive 131mph. Upon returning to the dock, he commented that the SC37 performed like a ‘thoroughbred with its tail on fire!’ It was encouraging to see a worthy selection of RIB and hard-boat manufacturers from the UK and Europe diplaying their wares, including Williams Jet Tenders, Axopar and Skipper, to name but a few. SuperYacht Miami, which was the place to be for those looking for the largest and most luxurious yachts, showcased Damen’s 182ft Gene Chaser and 180ft Gene Machine, as well as Oceanfast’s 163ft Thunder, within its line-up of luxurious superyachts. 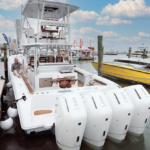 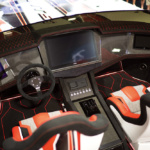 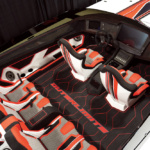 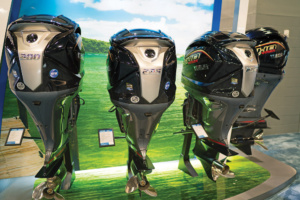 With the return to the Miami Beach Convention Center, ‘powered’ by West Marine, visitors got the chance to not only get an up-close look at the numerous motorboats on dipslay, but also the engine manufacturers, marine accessories, electronics and the ever-popular retail pavilions too. Apparently, the boat show was the first event to occupy the entire Miami Beach Convention Center since reopening after the pandemic and featured the largest variety of US boat brands ever, along with their thousands of marine accessories, gear, technologies and power systems. 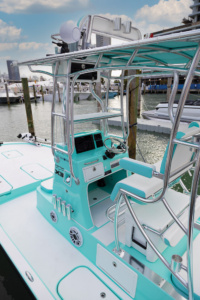 It was encouraging to see sustainability and innovation taking centre stage at this year’s event – a theme that was showcased at the Progressive Boat Show Experience in Pride Park. Hailed as the ultimate boater’s destination, Pride Park featured experiential activations such as the AquaZone from Nautical Ventures and the Costa Conservation Village. The latter was dedicated to sharing information on how we can all protect and promote a healthy marine environment. Electric Pavilion showcased state-of-the-art electric propulsion systems, battery-powered boats and other high-tech products from right around the globe. It’s our hope that the critical areas surrounding sustainability and innovation will be promoted by as many other international marine events as possible going forward too.

In line with this, emerging technology trends also made their way to the 2022 boat show, specifically in the arena of non-fungible tokens (NFTs), electric boats and cryptocurrency awards. Cloud Yachts, a digital yacht dealer, have created a strategic partnership with Informa Markets to release a limited series of 100 yacht NFTs (digital creations of existing assets) at the 2022 show. These NFTs were original pieces of artwork produced by many of the world’s leading superyacht designers. If you would like to check these exclusive items of artwork out, then this limited series is currently available on OpenSea.io/CloudYachts. 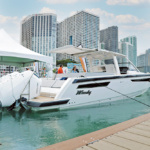 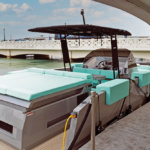 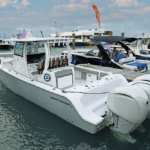 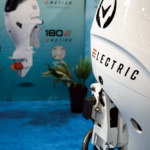 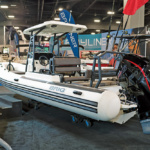 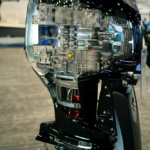 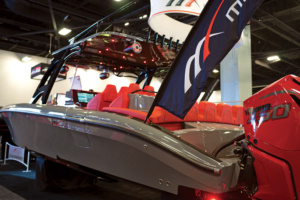 This year’s event was the first boat show to be integrated with the Discover Boating brand, which is the number one North American lifestyle brand for boating and water sports, aimed at attracting and engaging both current boaters and those new to the pastime. Frank Hugelmeyer, NMMA President, told PBR: ‘The reimagined, rebranded Discover Boating Miami International Boat Show was a resounding success and couldn’t have come at a better time, bringing all facets of the recreational boating industry together to deliver a world-class, one-of-a-kind experience to boaters from all walks of life. We are grateful to our partners and look forward to building on the 2022 event to continue to deliver the best of boating to hundreds of thousands of boating enthusiasts from around the globe for years to come.’

It’s our plan to dedicate more time again to next year’s show and come back armed with even more material to stream and showcase for you. Furthermore, if the idea of attending the 2023 show appeals to you, we’re certain you won’t be disappointed. It’s a boat show that will not only live up to your expectations, but more than likely will far exceed them! 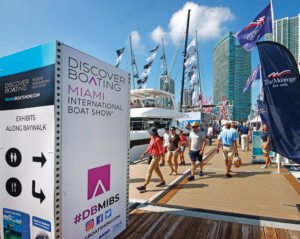 Historically, the Miami International Boat Show, the Miami Yacht Show and SuperYacht Miami have attracted over 100,000 visitors from approximately 35 countries around the globe to South Florida while generating an estimated $1.34 billion for the state.

The 2023 Discover Boating Miami International Boat Show is slated to return from 15th to 19th February 2023.

Transporting to the world 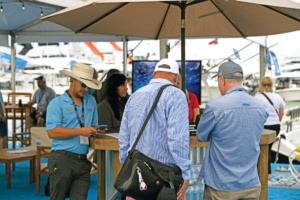 As an independent and trusted partner for some of the world’s leading manufacturers, yacht owners and racers, Legend Yacht Transport provides specific transport solutions for yachts and leisure vessels of all types and sizes. The company’s loadmaster team has global experience and pride themselves in not only handling some of the industry’s most delicate vessels, but also, some of the biggest yachts on the market too. All of Legend’s vital cradling systems are backed by Class A Yacht Transport Insurance, and besides providing on-deck charter shipments for large, luxury sea-going vessels, for smaller motor yachts etc too, Legend in-house Liner Solutions, work in partnership with a select number of reputable carrier partners to provide clients with the necessary trans ocean/international transport they require. Customized freight software developed by Legend, likewise, enables clients direct access to their shipping documents via an online portal. For further information, see www.legendyachttransport.com