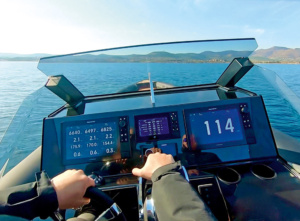 Photographic evidence – 114mph is a hair short of 100 knots.

Few, if any, powerboats roll out of their production yards ‘turnkey ready’ for 103 knots. But Technohull’s latest ‘Super Fast’ version of their 38 Grand Sport is exactly that – a limited-edition boat that will exceed 100 knots. The 38 Grand Sport Super Fast edition uses a totally different hull design to that of the recreational version. The hull has been designed from scratch to support the model’s extreme performance. It is different in terms of both the number of steps and the distribution and overall design from bow to stern.

The design is a variable deep-vee, meaning the deadrise angle starts to sharpen just aft of amidships, increasing progressively toward the stem. The construction, not surprisingly, is vacuum infused for a precise distribution of resin within the layers of composite. Quadraxial carbon is employed, giving maximum strength for minimum weight. Targeted use of Kevlar also provides reinforcement in key areas.

The second part of the equation is the engines, in this case three of Mercury’s supercharged 4.6L V8 450R SM outboards. This engine option can’t be changed, as apparently the hull design has been optimised to match the engines. If you just want an 80-knot top speed, you can opt for the slightly more sensible twin 450R-powered Grand Sport 38. The 450R SM is a perfect match for the Technohull, and a class-leading engine in terms of power to weight at just 313kg. The 450R SM uses Mercury’s low-drag surface-piercing Sport Master gear case, designed for boats capable of speeds in excess of 70 knots. This gear case features low-water pickups and a sharp leading edge for maximised efficiency, as well as a one-piece 1.25in-diameter stainless steel prop shaft capable of dealing with the power output. In terms of economy, 1350hp of petrol power relates to a claimed consumption of just under 0.8nmpg. The Super Fast edition features a deliberately lightweight tank construction, bearing in mind that this edition is aimed at being a speed machine and not an all-round boat, and hence the focus is placed on speed and not range. 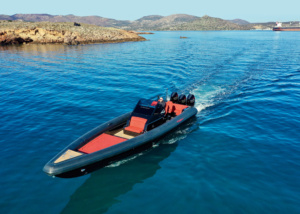 The sun pad is simply vast.

The Super Fast Grand Sport is focused on living up to its name. Consequently, four shock-mitigating seats are provided, with a wrap-around deep-set settee behind. The console is suitably tall, providing plenty of protection from the three-figure wind blast that you are likely to subject your guests and yourself to. A large heads compartment sits in the front of the console – access is gained by hinging the gas strut-assisted forward console seat upwards, and portholes provide some natural light internally. There is a vast sun pad in the bow, under which is an extremely large storage capacity. This area is also positioned sufficiently below the sponsons to enjoy some degree of wind protection. The tube construction is of high-quality Hypalon. In terms of colour, carbon black with red Silvertex upholstery is clearly a popular theme with Technohull, and for good reason, as it looks great and has proven popular, but other colours are on the cards.

The Super Fast edition was first launched in 2018–2019. Back then, it achieved 117mph (102.5 knots) with a high-performance set-up and various modifications.

In the meantime, Technohull have developed and put into production, the recreational version of their 38 Grand Sport. This vessel features an all-new hull design.

In response to customer demand, 2022 has seen Technohull put into limited production, a Mercury 450R powered Super Fast edition. Featuring the same deck and console, as well as some of the other luxury features of the recreational 38 Grand Sport, this latest model is also constructed using carbon and vacuum infusion but is not as streamlined as the 2018 version. Nevertheless, having 1350hp on its tail and weighing 1000kg more than the launch version, this RIB is still essentially a 100 knot craft. 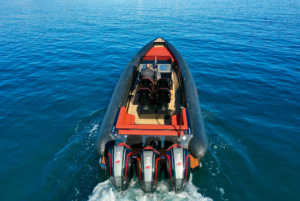