Dubai Police are the new UIM XCAT world champions, despite a superb winning finish to the season by Team Abu Dhabi’s Rashed Al Tayer and Majed Al Mansoori in the Dubai Grand Prix, as PBR reports … 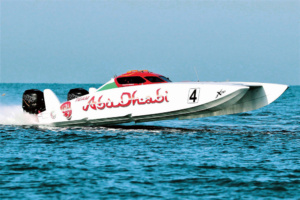 Team Abu Dhabi can look back on a shortened but often dramatic season of UIM World Championship powerboat racing with a great deal of satisfaction, and some impressive additions to the trophy cabinet. Between the F1H2O, F2, Endurance and XCAT championships, the team managed to deliver four world titles for Abu Dhabi International Marine Sports Club (ADIMSC), its home base in the UAE capital.

‘We’ve enjoyed a good deal of success to celebrate again this season, but as always the aim for Team Abu Dhabi is to look forward and build on our achievements,’ said Salem Al Remeithi, General Manager of ADIMSC. ‘Of course, our big hope for world championship powerboat racing is that we will see a much fuller calendar next year, with strong competition at all levels.’

The latest Team Abu Dhabi success came from Rashed Al Tayer and Majed Al Mansoori, who battled their way to a hard-earned overall victory in the Dubai Grand Prix, which rounded off the 2021 UIM XCAT World Championship. It was not enough to give them the XCAT world title, however, which went to the Dubai Police pairing of Arif Al Zaffain and Nadir Bin Hendi. Nevertheless, an 18-second victory over the Police boat in race two in Dubai, added to a pair of pole positions, suggests that Al Tayer and Al Mansoori in Abu Dhabi 5 could rise to the top next year. 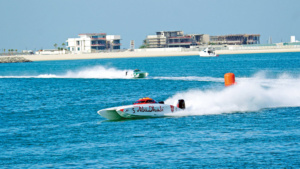 After a win that gave the two Emiratis the outright world pole position crown, Al Tayer said: ‘The race was very good for us. We started first, saved the boat until the end and we’re very happy with the win. We’re second in the world championship this time, but next year we want to go one better.’

Just 24 hours earlier, Abu Dhabi 5 had led for half of race one’s 18 laps before Al Zaffain and Bin Hendi powered their way through for a victory that ultimately proved to be decisive.

Taking the other podium place, as they had done in race one, 2018 world champions Shaun Torrente and Faleh Al Mansoori in Abu Dhabi 4 claimed third place overall in the XCAT World Championship. 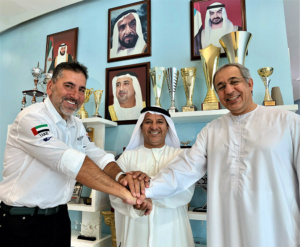 The XCAT grand finale in bustling Dubai had been preceded by an opening championship salvo of three races in four days at quiet and peaceful Fujairah on the UAE’s east coast. By the end of race one, Team Abu Dhabi knew the size of the task they faced to secure another UIM XCAT World Championship title after Giovanni Carpitella and Darren Nicholson took 222 Offshore to an opening victory at the Fujairah Grand Prix. Al Tayer and Al Mansoori in Abu Dhabi 5 finished runners-up to the Italian/Australian duo, while team-mates Torrente and Al Mansoori in Abu Dhabi 4 were halted by engine problems.

Torrente had arrived in Fujairah following a hectic week in Portugal where, across two qualifiers and Grand Prix races inside four days at Figueira Da Foz, he combined with Thani Al Qemzi to give Team Abu Dhabi a fourth successive F1H20 team title.

In a dramatic climax to the drivers’ title race, the Team Abu Dhabi duo both lost out narrowly to Sweden’s Jonas Andersson and Al Qemzi by a single point, with Torrente – champion in 2018 and 2019 – finishing just two points further adrift in third place. 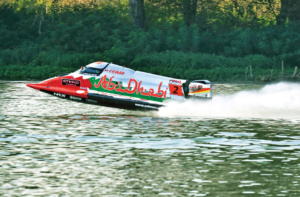 Having been denied a hat-trick of world titles, Torrente was determined to secure another XCAT triumph as he headed straight from Portugal to Fujairah. Back in tandem with Faleh Al Mansoori, he shrugged off the first race setback to grab victory 24 hours later by 5.12 seconds from Dubai Police.

Al Zaffain and Bin Hendi responded to secure a third race win and were able to carry a 13-point championship lead back to home waters. They stretched that advantage to 18 points with a first race success in Dubai, before being disqualified from pole position the next day for repairing a broken steering hose after the session had started. Despite that setback, they came through the field for a second place and the XCAT world title. 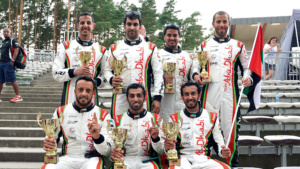 Victory for Al Tayer and Al Mansoori in Abu Dhabi 5 saw them top the Dubai Grand Prix podium, adding to the key role they played in July as Team Abu Dhabi clinched a one-two triumph at the UIM World Endurance Championships in Poland. It was a particularly noteworthy achievement, as all seven members of the two-boat Abu Dhabi team competing on Lake Necko were Emiratis.

Starting from pole position, the brilliant Emirati driver completely dominated the final round of the series at Vila Velha de Ródão, winning by the commanding margin of 8.686 seconds from the host country’s defending world champion, Duarte Benavente. It was the fourth successive Grand Prix win in Portugal for Al Qemzi, who has benefited enormously from Capellini’s experience and influence. It seems inevitable that Rashed, the cousin of F1H2O veteran Thani, will ultimately follow him into the flagship international series of single-seater inshore circuit powerboat racing.

Thani, meanwhile, retains the capability and determination to continue his quest for a first F1H2O drivers’ title, having done more than enough to deserve one since making his debut in the series in 2000. No achievement would be more warmly celebrated at Abu Dhabi International Marine Sports Club.

The home of champions

Abu Dhabi International Marine Sports Club is a world-renowned venue for powerboat racing and the driving force behind the highly successful Team Abu Dhabi. It offers a superb stage for spectacular marine sport action between its base on the Breakwater and the Corniche in the UAE capital.

Since 1993, the club has provided a strong organisational base for a wide range of marine sports events and activities, which have added to Abu Dhabi’s status as a world-class sporting destination. Its support for powerboat racing and jet ski events is reinforced by its position as a founding member of the UAE Marine Sports Federation and as the national authority representing the UIM, the international governing body of powerboating.

The club prides itself on providing top-class services and facilities to support the full range of marine requirements, from leisure boating to international sports events. 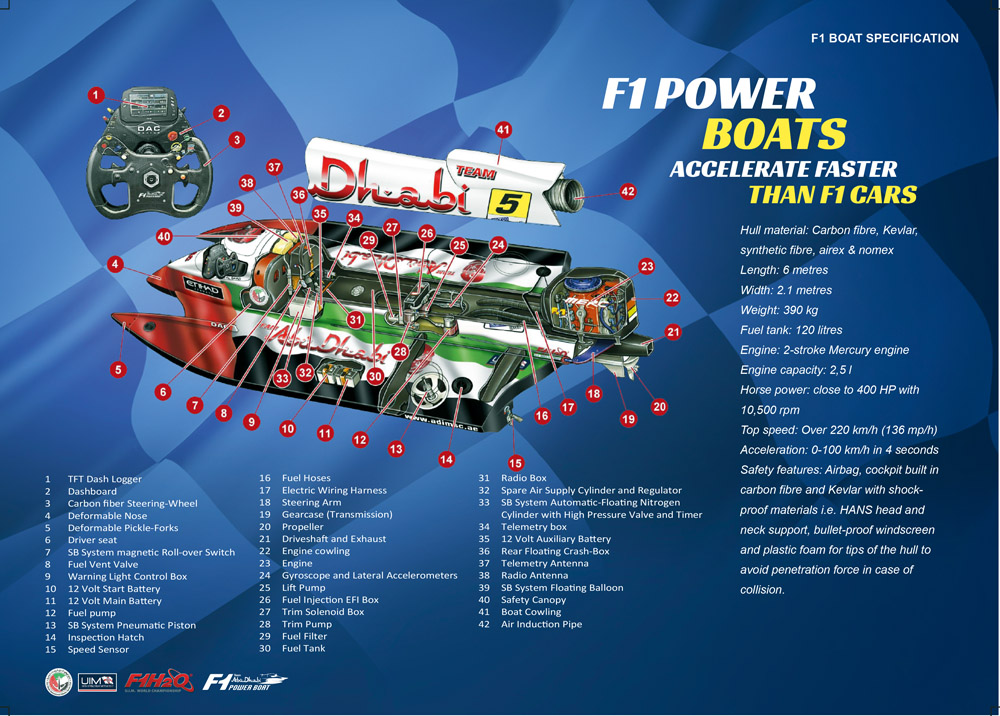