Due to hit our shores next year, the 50-knot Alizé is a sports boat with few equals. Greg Copp explains why …

If you are familiar with Windy, then your first glance at their new 34 Alizé will have you thinking ‘35 Khamsin’. It is not that the Alizé is a dead ringer for the Khamsin, as it is an entirely new boat designed from the keel up. However, something was missing from Windy’s stable when they ceased production of the Khamsin back in 2013, and the new 34 Alizé has just filled this void perfectly. The Khamsin was arguably the best sports boat in its class. It was perfection to drive – steering on rails and running through rough weather with the indifference of a bigger boat. I do not doubt that the Alizé will be just as good on the water, if not better, and its contemporary lines put this craft well into the first quarter of the 21st century. The design team responsible for this boat’s drop-dead looks is Espen Øino International, a Monaco-based studio with 25 years of top-tier design experience.

Windy consider this boat to be the ‘long-awaited sibling’ of the 2020 37 Shamal. Like the Shamal, the Alizé runs on an ‘aggressive deep-vee hull’, which I suspect will have a transom deadrise angle of around 24 degrees – as was the case with its Khamsin predecessor. Power options have moved with the ever-evolving trend to pack more into less. There is the petrolhead’s delight in the form of two 430hp Volvo V8 petrols on duo-prop sterndrives, providing a top speed of around 50 knots. We will probably see few petrol-powered versions in UK waters, though some will likely be ordered in the Mediterranean. Then there is the more sensible twin-engine option of two 320hp Volvo D4 diesels driving through DPI duo-prop sterndrives, which will be good for 45 knots or so. Those that want economy and range can opt for a single 440hp Volvo D6 with DPI sterndrive, which will still be an exciting boat with nigh on 40 knots available. The ultimate Alizé is the double D6 version, with either twin 400hp D6s or twin 440hp D6s, which will drive this boat past 50 knots. 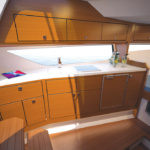 The sliding curtain can shut off the mid cabin. 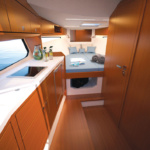 The American walnut joinery works well with the Corian worktop. 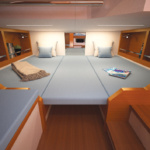 An infill creates a double bed.

The cockpit design makes good use of every inch of space. The double rear-facing bench seat aft of the double helm seat can be slid back and the cockpit table then lowered to create a sunbed. This is in addition to the larger sunbed that sits over the engine bay. This has an adjustable seat backrest that can be positioned to create a huge open-plan sunbed or a big luxury aft-view recliner. There is an optional wet bar with cool box, refrigerator and sink, but its exact location has not been confirmed yet, though it will likely be on the port side in place of the forward-facing navigator’s seat, and the rear-facing seat behind. Alternatively, the galley could sit behind the helm seats in place of the aft-facing bench seat, though this would compromise dining space, so the first option is most likely. Secure grab rails are integrated into the windscreen, keeping the lines clean and uncluttered.

All deck fittings on the Alizé are made using the highest-quality materials, and the upholstery is offered in several colours, as well as there being different hull wrap colour schemes. Foredeck access is through a windscreen gate, served by four gently inclining steps. The aesthetically pleasing low-level foredeck fender rails that the vessel is fitted with make better sense than the half-height guard rails, which are often used on the questionable pretence of providing some degree of safety. In keeping with this company’s high standard of construction, all GRP components are built using resin infusion with a lightweight sandwich foam core. 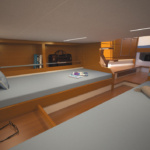 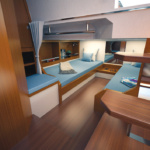 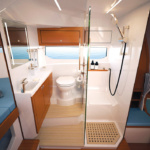 Below decks, Espen Øino International have been no less industrious. They have used an effective open-plan design that unites the mid cabin with the forecabin, should you want it. The mid cabin has two long single berths that can be converted into a double with an infill. When needed, a curtain shuts off the mid cabin from the midsection, which thanks to a central drop in floor level has full standing headroom where you need it – by the galley, in the heads and in the generous shower compartment. The forward double bed is just that – there is no facility to convert it to a dinette with a table, thus it has substantial storage beneath, as well as a surrounding set of head lockers. The joinery choices are either ice cool oak or American walnut. Windy have not lost sight of the need for a well-equipped galley, as the Alizé comes with a diesel hob, full-height refrigerator, Corian worktop, air con and diesel heating. Entertainment is courtesy of a Fusion hi-fi, and a 16in Raymarine Axiom MFD is standard fitment, with the option to upgrade to a larger display. The big questions, of course, are when, and how much will it cost? Time will soon tell. 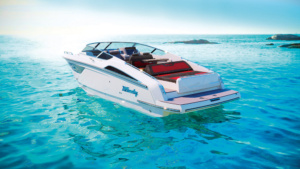 With the launch of the Alizé, PBR took the opportunity to put some key questions to Trevor Fenlon, MD/CEO of Windy.

When did the Windy 34 Alizé project begin?

We started sketching out the concept and what we were trying to achieve with Espen Øino at the beginning of last year. By May of that year, we felt we had ticked enough boxes to move to the full-on design engineering stage, and 12 months later the first Alizé was under test in the Baltic Sea.

How many on the Windy team are assigned to a new build programme such as this?

We have inputs from many within Windy, not least our dealers. However, primarily it has been our design engineering manager, Jack Fenlon, and two of our design engineers, Gasper Peternelj and Jools Fenlon, that have worked full-time to drive the project to fruition.

What was the catalyst behind adding the 34 Alizé to the current Windy line-up?

We wanted to fill the gap between our W32 Grand Zonda and our W37 Shamal. We had talked for a long time about filling the gap when we stopped the 34 Khamsin production back in 2013, and the Alizé is our long-awaited successor to that model. By the way, we have already sold 27 off plan.

What type of investment is required to bring a new vessel of this type from concept to completion?

Well, the development cost is one thing in itself, but the main investment is in people. One must have a driven and motivated team that is prepared to consider all opinions, but at the same time push relentlessly towards the targets. Many can produce a boat, but the question is: who can produce a beautiful boat that is successful, contributes to the brand, can be built cost-effectively and sells in sufficient volume to justify the investment?

Can you describe some of the obstacles and challenges you have faced in the manufacturing of this new product?

To be honest, we now have such a strong design engineering department and have already run so many projects with Espen Øino International that we now work together like clockwork.

In terms of potential customers, who do you anticipate will be particularly excited about the launch of the 34 Alizé?

Mainly Europeans, as we have gone with sterndrive engines. We have seen huge interest from every single one of our European dealers, and we could have sold the Alizé at the start of our production year twice over.

Does the new model’s construction or method of production involve any sustainable and technical advancements?

Like all new Windy launches, the Alizé is vacuum infused, which serves our primary focus of health and safety for our employees, as well as keeping the weight down to reduce fuel consumption. Weight has been a big factor in our design. Interestingly, this is the second large-volume production boat where we have moved away from teak, which is an ethical standpoint for us.

When can we expect to see the first Windy 34 Alizé here in the UK?

We are in the throes now of implementing a new sales dealership in the UK, so it will be in the first full production season that the Alizé will hit UK waters. The UK has always been a strategic market for Windy, and we expect the look, functionality and performance of the new 34 Alizé to be a big hit among our loyal UK Windy family.