Just one week after Emirates Team New Zealand first ‘christened’ their hydrogen-powered foiling catamaran Chase Zero, the 10m prototype was up and foiling around Waitematā Harbour in Auckland, as PBR reports … 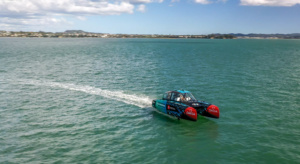 Chase Zero has been progressing through a highly measured and stringent commissioning process, with every element of the hydrogen-powered boat tested independently and collectively before bringing it up to foiling flight mode with the ETNZ-developed autopilot in control of the ride height.

‘This is just our second day on the harbour,’ explained Project Manager Geoff Senior, ‘and if I am honest, we are always pretty conservative with our commissioning time frames, but everything has worked amazingly off the bat – maybe one or two small gremlins to work out of the system as always, but we didn’t expect it to all be up and foiling as quickly as we have got it today out here.’

This is the same harbour that in late August 2012 saw Emirates Team New Zealand first introduce foiling to the world of the America’s Cup in their AC72 catamaran yacht, which changed the face of sail racing globally. And now, just under 10 years later, the team are introducing hydrogen-powered foiling chase boats to the America’s Cup too. The common theme is obviously foiling.

Looking on was Emirates Team New Zealand COO Kevin Shoebridge: ‘This really is a considerable step forward in clean renewable energy in the marine industry. Looking at Chase Zero foiling along today, it looks like a futuristic powerboat, but then you actually need to remind yourself that there are zero carbon emissions; it is basically water vapour coming out of the exhaust, which is amazing when you consider the positive environmental impact that can be made by reducing emissions from regular boat engines.’

When acknowledging what the Chase Zero team have achieved in the past nine months, Emirates Team New Zealand CEO Grant Dalton said: ‘The team have really delivered under all sorts of COVID challenges and pressure to get this boat designed, built, commissioned and foiling in such a small time frame. And when I say “the team”, that includes the essential partners we have brought together as well, like Toyota, Global Bus Ventures, Gurit and several others.

‘This project is all about proving how we can influence the global marine industry by producing a prototype hydrogen-powered foiling catamaran. And today has been a huge progression towards that. We have no doubt there will be a lot of entities and organisations that will be watching and thinking how the technology can be adapted to their specific use case or ideas.’

The Chase Zero team will continue their commissioning process over the coming weeks to be ready for use when the team resume sailing operations later in the year.