Hearing for the first time that Wellcraft had launched a new boat, my initial thoughts went to a centre console fast fisher. After all, this US company has plenty of form in this field – but Europe has different tastes. Being part of the Beneteau Group, this Wellcraft is built in Poland, and I suspect that some of its design team took their cue from what is becoming increasingly popular in European waters. By this I mean the forward-inclining wheelhouse boat. Axopar can claim to be a leading pioneer of such vessels, along with the ‘adventure craft concept’. Imitation may be the sincerest form of flattery, but the ‘go anywhere, do anything’ type of boat has a movement that many boatbuilders feel the urge to follow. 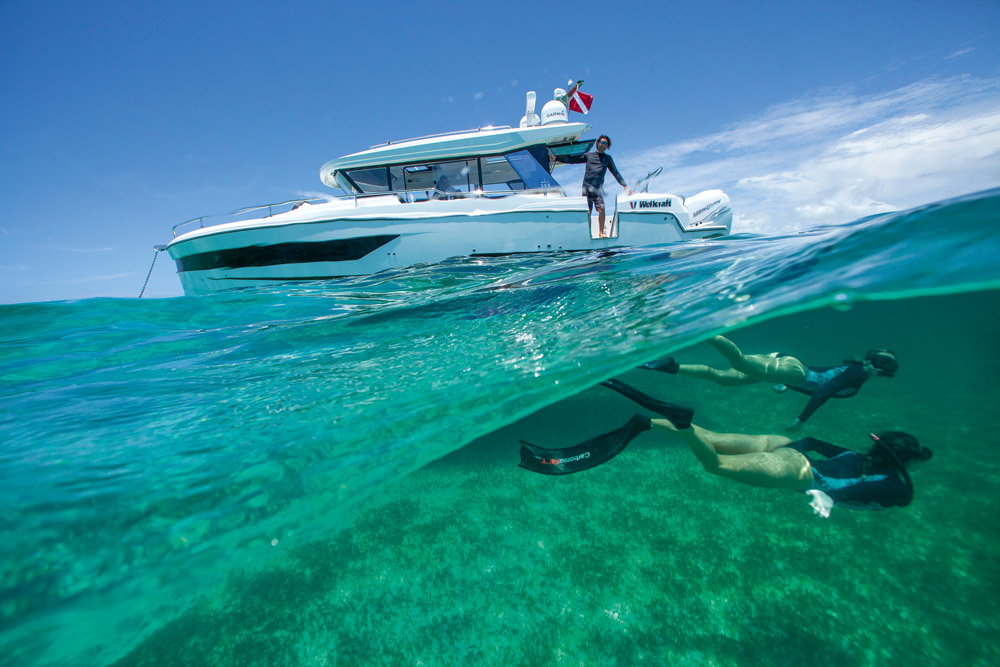 The truth is that this new boat is an impressive-looking craft, and considering this company’s track record for building sturdy offshore vessels, it will likely prove capable in our changeable northern waters. The deep-vee, non-stepped, resin-infused hull has been designed by Michael Peters, a man with a substantial portfolio of high-performance hull designs to his credit. I strongly suspect the drive of this boat will be as good as it looks. Power options are far from modest – either triple 300hp Mercury V8 Verados, triple 300hp Yamaha F300s or triple supercharged 350hp Mercury Verados. The 900hp Mercury-powered boat has reached a claimed 46 knots, while the 1050hp-powered version is capable of reaching a claimed 50 knots, we have been informed. Fuel consumption, not surprisingly, is far from modest. With triple 300hp Mercury V8s, the 355 returns 1nmpg at 27 knots, while at 38 knots – this boat’s fast cruising speed – consumption drops to 0.8nmpg. Wide open throttle at 46 knots sees the tank emptying at a rate of 0.7nmpg (all figures are for a fully loaded and fuelled boat at 9.5 tonnes). Interestingly, the fuel figures supplied show that the triple 350hp boat is slightly more economical at similar cruising speeds, though at its maximum speed, consumption drops to an eye-watering 0.6nmpg. Many will question the logic of so much petrol power with present fuel prices, but the alternative is big and bulky diesel sterndrives with larger price tags and heavier servicing costs.

The helm design is focused on providing the skipper with an expanse of information at a glance. Two 16in Garmin MFDs sit forward of the primary switch bank, joystick, bow thruster control and throttles. The leather-covered wheel matches the three leather-upholstered flip-down bolster helm seats – each with folding armrests providing lateral security in rough weather. The detailing in the leather upholstery is impressive – of the standard you would expect from a high-end luxury saloon car.  If you need to stand, then an angled footboard enables you to elevate your position while wedging your rear end into the bolsters – providing that crucial clear view over the bow in rough weather. 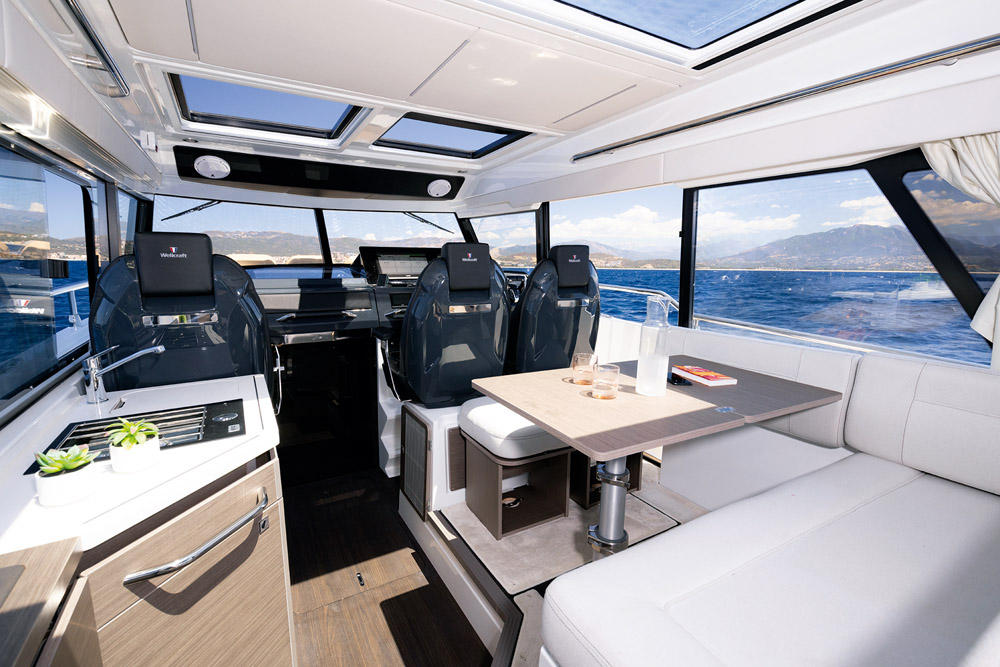 The wheelhouse design has been carefully thought through, notably the large starboard side door. It is sufficiently wide to enable both the helmsman and crewmembers in the wheelhouse to exit. Seating in the saloon section of the wheelhouse comprises an L-shaped sofa on the starboard side. This serves a folding table, which if needed can be lowered to create a double bed in conjunction with the sofa. The starboard section of this sofa is composed of two modular sections, which can be repositioned, providing seating around the table as desired. The whole of the aft end of the wheelhouse opens up to the cockpit. The window section behind the sofa hinges upwards, locking horizontally under the coachroof overhang, while a port-side door provides external access. Running down the port side of the saloon section sits the galley; this includes a full-height fridge, a good-sized sink, a reasonable amount of storage and a single flush hob. 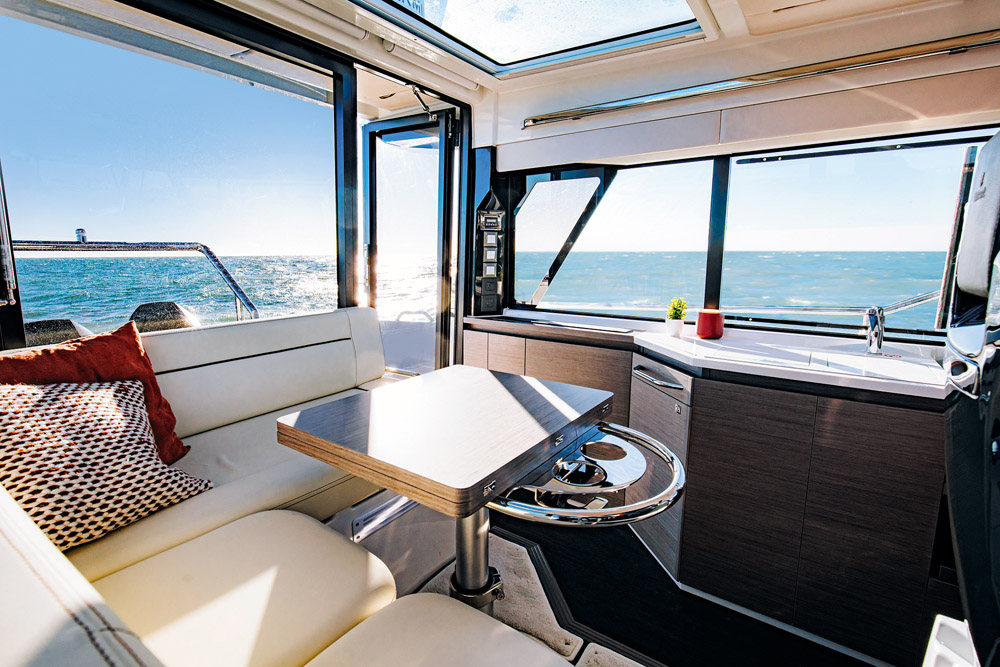 The cockpit has three variations: the first option has a big fender/dive bottle rack sitting over the transom; the second has a bench seat across the back of the cockpit; and the third choice is a second galley/bait well, with rod holders on the aft edge of the coachroof. All options have twin bathing platforms flanking the engines, storage lockers on the back of the wheelhouse and twin bulwark gates on either side. Large self-draining storage lockers sit either side of a huge storage cavity under the cockpit. This is one of the bonuses of outboard power, as this area is freed up to provide space for a generator, easily accessible system components and the optional Seakeeper SK3 gyro stabiliser. Deck movement benefits from the asymmetrical wheelhouse design, providing a deep full-width side deck on the starboard side. This takes you forward to a triple sunbed on the foredeck, facing additional seating over the forepeak. Thanks to the boat’s vertical stem bow, the forepeak can accommodate a huge anchor locker. Being what has now become known as an ‘adventure craft’, it has the all-important roof rack, onto which kayaks and boards can be secured. 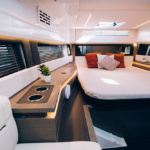 The cabin is focused on the king-sized bed. 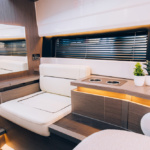 The cabin has some storage and a hanging locker. 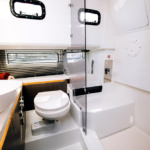 A generous heads with a separate shower compartment.

Below decks, Wellcraft have focused on providing as much space for two as possible; consequently there is no ‘token cabin’ under the cockpit. Instead, a full-height cabin with a very large double bed is flanked by flush storage sideboards. Long hull windows provide plenty of light, and a single hanging locker is located next to the companionway steps. A generous heads compartment sits on the starboard side, complete with a separate full-height shower compartment – the sort of shower that you would be tempted to use over the marina facilities.

This is by its nature an individual boat, thus there are a host of extras to suit different needs and tastes. It has been built to meet the growing demand for the multi-purpose go-anywhere adventure craft, which predictably are growing in hull size. The only thing that really differentiates the 355 from its Baltic counterparts is that it has an American brand name combined with a Scandinavian personality. 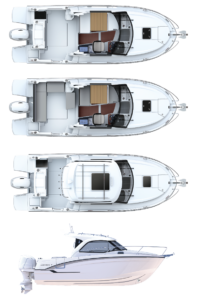