Greg Copp considers whether, with the rise of the giant outboard, twin-rigged boats are to become a thing of the past…

The argument of two engines versus one has been going on since the advent of pleasure boating. Each concept has its pros and cons, which to a degree has changed over time thanks to advances in technology. More recently, global warming has become an extra dimension, lending an extra voice to the finger-wagging proponents of ‘one prop in the water’.

I have always subscribed to the notion that if it can go wrong at sea, it likely will at some point. This might have something to do with the fact that my first twin-engine boat, with two 25hp Johnson Seahorse outboards, lost an engine to self-destruction on the first day. From that point I looked keenly at the newly emerging range of 4-stroke Honda outboards, thinking ‘Japanese 4-stroke technology, it’s the way forward’. I was was not far wrong. Now we have a multitude of super-reliable outboard engines all the way up to 600hp in output, so is there any justification for having a couple of biggish engines on the transom as opposed to one big lump?

In this case, it is never easy to make a true back-to-back comparison, unless you have two identical boats, one with a big single and the other with two smaller engines, and on the same day. This opportunity luckily availed itself when Premier Marinas offered us a pair of their Agapi 950s from their Premier Boat Club range. If you do not know the Agapi, I will tell you from having tested one that it is one of the best boats in its class in terms of the driving experience. Swedish built, it is superbly designed and finished, and runs on a great hull – perfect for comparing two different engine rigs. 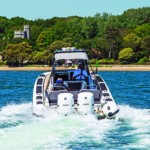 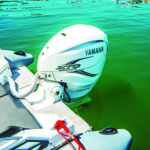 The XTO 425 might look a bit lonely on its own, but this big V8 can still push the Agapi to over 40 knots. 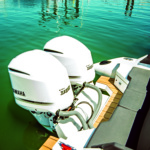 The engine configurations on the boats were as follows: first, twin V6 Yamaha F300s – an engine that has been around for a decade now but is still a great engine. Highly reliable and with a broad spread of power, it is still a serious contender in the 300hp category; secondly, a single V8 Yamaha 425 XTO, the biggest Yamaha have to offer at the moment, which launched in the last few years and has replaced the F350. The simple mathematics of 600hp versus 425hp would normally mean a huge performance bonus for one boat, with a bigger fuel bill to match, right? However, it is often argued that the drag of two outboard legs (or sterndrives/pods for that matter) equates to quite an efficiency drop, which some claim is as much as 20%. The advent of Computational Fluid Dynamics (CFD) has often served to reinforce this concept. On this basis, two 300hp outboards should have the same top-end power delivery of around 480hp, with the bonus of two propellers giving better mid-range acceleration. Putting this to the test was interesting, and my figures for the two boats are as follows: From this we can deduce that at displacement/low semi-displacement speed of 7.3 knots, the two boats have very similar fuel consumption, as would be expected. However, moving up through semi-displacement speeds, the consumption for twin F300s is 20% higher at 12 knots, decreasing to 14% at 17 knots when the boats are starting to plane. Once the Agapis were running in their sweet spot zone from 23 to 30 knots, the consumption was near identical, with no noticeable penalty for twin engines. This can be attributed to the fact that there is more dynamic lift at the stern, so the outboard legs create less drag, and that the twin F300s are running at between 3000 and 3500 rpm between 23 and 30 knots. The F300 starts to produce maximum torque around 3400/3500 rpm and is consequently at its most efficient around this point. In comparison, the F425 is spinning between 3600 and 4700 rpm across the Agapi’s sweet spot zone, and is simply having to work harder. Once the twin-engine boat exceeded the speed at which the engines were out of their ‘comfort zone’ and burning more fuel in relation to power produced, the extra drag of two outboard legs exacted a price.

Simply looking at the acceleration figures, the twin-rigged boat looks a clear winner. It is a lot quicker and also quieter, and you do not get the feeling that the engines are having to work. Getting straight from the twin F300 boat into the 425 XTO Agapi, what struck me once we were up and running over 30 knots was the extra mechanical noise from an engine having to work harder. The XTO-powered boat does turn slightly quicker with just one engine on the transom, but both these boats steer superbly. The twin-engine boat would certainly be a lot more responsive when driving in any degree of seaway, but what really makes the case is the performance rush of twin 300hp engines. It takes half the time to get to 40 knots compared to the single-engine Agapi, and the whole experience feels more relaxed.

It is really a case of horses for courses, because if performance is secondary to clocking up some sea miles at a fast cruising pace, then the 425 XTO will pay dividends past that 35-knot point. However, beyond this speed the boat does not feel as relaxed as its twin-rigged counterpart, so in terms of comfortable cruising, 35 knots is the speed to maintain with this particular boat. When it comes to berthing, obviously twin engines have an advantage over a single, but with boats like the Agapi often coming with a bow thruster, a big single is far less of a headache to berth than would otherwise be the case.

There is no black and white answer, as both engine configurations have their merits. If you simply do not need the extra power of twin engines, then the cheaper initial purchase price, slightly lower fuelling costs and smaller servicing bills of one big engine make sense. On this matter, I should say that outboard servicing does not mirror the often exorbitant costs associated with maintaining complex sterndrives, whose appendages sit submerged in salt water. Often the deciding factor in the question of two versus one comes down to what I alluded to at the start, namely security at sea. Even with today’s super-reliable outboards, there is a degree of reassurance from having two engines that is hard to put a price on.

Details on the Premier Agapi Boat Club can be found at www.agapiboatclub.com

This Swedish yard may have been around for only a decade or so, but it has clocked up a few international awards. Built for demanding use in Baltic waters, it was with no surprise that upon stepping aboard the 950 for the first time in 2018, I found myself surrounded by high-quality fittings, all topped by a carbon-fibre composite T-top.

The devil is in the detail with this boat. For example, there is a clinical neatness about the Flexiteek-covered foredeck, embellished with inset guard rails, a flush-fitting deck hatch and a deck windlass running an internal anchor chain through a stem tube. Being typically Scandinavian in design, the guard rails are tall enough not to be a low-level trip hazard, while providing a stooped handhold if need be. They also serve the purpose of providing somewhere to hang fenders, which this boat, unlike more conventional RIBs, needs with its comparatively high forward topsides.

The seating design gives the Agapi a big social dimension. The seatback can move backwards and forwards, converting the seating into either a huge sun pad or a large double bed. Under the helm seat is a drawer fridge, and above it a cleverly designed fold-out gas hob and sink. With the optional T-top, drop-down covers and its Eberspacher heater, this boat quickly turns its cockpit into extra living space. On top of the T-top sit twin compact spotlights, and a long 60W solar panel feeding the leisure batteries. This is capable of supplying the voltage drain of the fridge during daylight hours. Under the rear seat is a huge storage space in which can be found four batteries, fuel filters, the Eberspacher, and bags of room for cruising supplies and water sports kit. For many, the biggest appeal of this boat is the below-decks accommodation. You actually get one moderate double berth in the forepeak and one wide single amidships, and it has an electric sea toilet in the heads compartment. Since its debut in August 2020, the Premier Agapi Boat Club has seen a steady growth in membership from customers excited to experience the thrill of performance boating – at a fraction of the cost of traditional ownership. Currently based at Premier’s Swanwick Marina with plans to expand to other locations across Premier’s portfolio, the Premier Agapi Boat Club, offers an established subscription membership model suited to both experienced and novice boaters. With a variety of membership and training options on offer, members can tailor a fee plan to reflect their boat choice, level of usage and service level requirements. Club members also have access to a selection of Premier’s Solent based marinas with options for overnight stays and the opportunity to use any of the growing number of Agapi Boat Club Centres in Europe.  The Club’s fleet already includes the award-winning Agapi 950, an Agapi 800, Ring 680 and a Ribeye 650 and earlier this year the club took delivery of an additional Agapi 800 and an Agapi 950 – powered by a single 425hp V8 outboard, Yamaha’s most powerful outboard to date.  Built to a high specification, all six vessels are sea-going craft plus, the four Agapi cabin RIBs also offer year-round boating and stay-aboard options, with below deck accommodation, an electric sea toilet and cooking facilities; with capacity for up to 8 people they make for a great friends and family boat.