Artificial intelligence brings a new dimension to the concept of all-seeing thermal imaging. 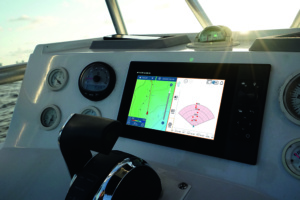 Oscar can be displayed on an MFD.

Thermal imaging and image intensification night vision technology has been an option for pleasure boaters for some time now. AIS and the plethora of ever-advancing digital radar systems have also made the risk of collision even less likely, so what does Oscar Sentry have to offer? Oscar is the product of Raphael Biancale, a Franco-German automotive engineer whose passion for transatlantic sailing led him to conceive a system that would enable skippers to navigate the oceans by night in ‘complete safety’. This is no small task given that some of the most potent dangers are often the ones you can barely see. A lobster pot or some driftwood can pose a serious danger to a powerboat travelling at planing speed, both of them being effectively invisible in fog or low-light conditions.

Oscar’s view of the world is courtesy of triple lenses: two thermal cameras and one colour camera. The thermal cameras detect anything floating, no matter the size, in night, day or fog. The colour camera, once aware of what its thermal counterparts have seen, will then lock onto it to give an accurate image in daylight hours. These cameras monitor the surrounding environment in an arc of 120 degrees out to a range of 600m. They are connected via Ethernet to twin Nvidia Jetson computers, which calculate the position and course of any objects, and any risk they pose in accordance with defined parameters, and the system’s artificial intelligence (AI). This is courtesy of a calculation unit and software that can analyse the video feed in elapsed time using algorithms based on artificial vision. As well as the MFD display, there is an app available for iOS and Android, or on-board PCs and laptops. This technology has taken its inspiration from the automotive world, namely Advanced Driver Assistance Systems (ADAS), where computer vision is used for imminent danger detection and collision prevention by activating features like automatic emergency braking. This is a typical display showing what the system can see, and at what distance. Since 2017, 15 engineers have been working on the Oscar project, developing a new form of AI, enabling computers to see in a similar way to human beings. Oscar’s AI is based on a self-learning process, which relies on a network of artificial neurons, based in principle on the concept of how neurons function within the human brain. This enables this system to enrich its database with information accumulated from its ‘on-water experience’. The more information that is acquired, the better the system will perform. Oscar has been tested in a variety of vessels since 2018, and over this period it has analysed and processed a wide variety of data collected by the end-user. Over time, its collection of ‘object information’ has grown extensively from navigation buoys and driftwood to shipping containers, icebergs and aquatic life.

The ultimate aim of Oscar is to be able to interface it with autopilot so it can pass on any potential collision risks, so that the skipper can consent to a course change.

Though this system is certainly out of its preliminary phase of development, it is still ongoing in terms of its full potential, which looks substantial. However, having had substantial input and R&D from several leading French yachtsmen, BSB Marine in northern Brittany have now effectively developed this concept from prototype to production.