Even-keel boating at the push of a button.

This fully automated ‘Vessel Attitude Control System’ (VACS), like its gyro siblings, is an all-singing, all-dancing and all-thinking set-up. It requires the smallest amount of human input to provide a smooth and level ride in a variety of weather conditions.

The Seakeeper Ride appears to be more than just another automatic trim tab or interceptor system. It does, of course, work on the same principle by creating alternate lift on either side of the transom. It claims to excel in its speed of operation, as its transom-mounted controllers can fully deploy their rotary blades (sometimes referred to as ‘scoops’) through their full travel range of 25mm in less than one tenth of a second. This means that hull attitude can be corrected close to real time, even with a fast-planing boat. The controllers are mounted to the boat’s transom below the waterline. Using proprietary inertial sensing hardware and software, the system understands how the boat is behaving in all three axes. It subsequently commands deployment of the rotary blades, making 100 adjustments per second, creating lift that manages the vessel’s motion instantaneously.

The controllers, or ‘actuators’ as they are also called, being of a rotary design, require minimal current to operate, thus drawing just 7 to 10 amps. The actuating arms that raise and lower the scoops sit on either side of the port- and starboard-mounted controllers, and so are connected directly to the controller’s internal motor. Being mounted on the outside of the hull, there is also the implied advantage of seawater cooling helping to maintain the efficiency of the actuators. 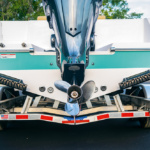 The actuators appear to be wider than most trim tabs. 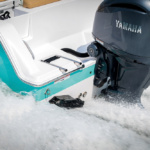 Though wide, they are relatively short. 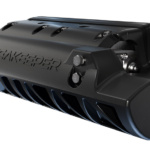 The powerhouse of the system is housed within each actuator.

Human interface with this VACS at the moment appears to be through Garmin’s OneHelm app via a Garmin multifunction display (MFD), or a simple Seakeeper control panel. Considering that this company’s stabiliser systems can be controlled through a variety of different MFDs, one can suppose the same will apply to their Ride system in due course. OneHelm enables easy touch screen control, so you can manually adjust the attitude of the boat for unusual weather or loading.

Chris-Craft, Scout Boats and Sportsman Boats in the US have joined Seakeeper as launch partners for Ride and will be making it standard fitment for many of their models. Other companies will no doubt soon be listing this as an option, and it will also shortly be available for aftermarket fitment. Three are currently three models, the Ride 450, Ride 525 and Ride 600, ranging in boat size from 19ft to 35ft, and in price from $4,500 to $10,500 (excl. VAT and shipment costs).

The key features are: