Let’s use the Electronics!

Having fun afloat comes in many forms. For some, it’s anchoring in a deserted bay; for others, it’s taking the kids for a blast along the coast; while for others still, it’s utilising your skills to execute a passage from A to B using the latest electronics to smooth your journey.

There’s no doubt that for making passages the primary tool in a boater’s toolbox is the chartplotter. These are generally simple to use, contain a range of great features and, with some of the more advanced systems, allow you to link between your devices, such as phones and tablets, and the chartplotter itself.

This is a snapshot of the current Navionics chart for Poole Harbour. This buoy with a light and foghorn simply doesn’t exist.

In this article we’ll look at some of the great features of these tools and also some of the limitations that you need to keep in mind when you use them.

A chartplotter is a simple concept. Basically it’s a photo of a paper chart with your boat’s position superimposed on it. As technology has progressed, these charts have become digitised, allowing users to switch some detail off. Sometimes this is good, but there’s a danger you might remove some data that’s important – like rocks! The electronic charts within chartplotters are increasingly accurate, but beware that they may not always be 100% correct, as unlike paper charts this is not a legal requirement. As time passes this is less of an issue, and accuracy improves and errors (generally) get removed.

The main way that chartplotters are used by powerboaters is to have the chart image in front of them allowing them to track progress along a channel into a harbour or estuary or in the approach to a marina. There’s no doubt that this is a great feature, but when you use a chartplotter for this you need to understand the potential issues that could arise and the possible limitations of the system.

So how accurate is your chartplotter? The GPS system that feeds your chartplotter its position is generally really accurate – better than 15m 95% of the time. This means, however, that 5% of the time the accuracy may be less good and this could be 16m or 300m+. Does this matter, though? At sea, away from land, an error may not matter, but in a narrow channel being even 30m out of position could really cause you some big issues. Part of the problem is noticing when this error is present – in a car it’s pretty obvious when your satnav has an error as you will see your car driving off the road. Obviously you know this is an error as it’s easy to see, but when afloat, you could be far from any obvious mark when you get such an error, with the result being that you ‘correct’ your position and inadvertently take the vessel into danger. The image shows this concept. The solution for this we’ve covered in previous articles, i.e. having a pilotage plan to use with your chartplotter and chart – a robust, multilayered approach.

So what are these great features? 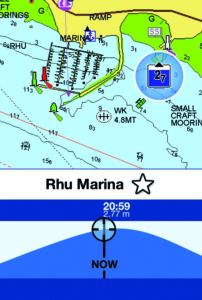 Tidal information: There are plenty of apps and websites that give you tidal height information, although getting it from your chartplotter or chartplotter software is a really handy way to do so – especially as it shows you clearly what area this tidal information relates to. The really good part, though, is the way that you can get tidal stream information. Arrows on the chart show rate and direction, and clicking on them gives you access to how this tidal flow will change over the next few hours or even days/weeks if planning a trip. This is a really great, visually simple way to get this information.

Depth information: Of course, all charts tell you what the minimum depths will be at the lowest tides, but one of the features that’s a recent addition is the ‘crowdsourcing’ of depth information. Take a lake like Windermere. There is a basic chart available but it doesn’t give any depth information as the area is not properly surveyed. Many boaters, though, have plotters and depth gauges that link to their Navionics account. As they trundle around the lake they capture depth information, which is then shared with Navionics. They then consolidate this, providing the option of viewing the depths across the lake using this information sourced from others – very clever and potentially hugely useful. 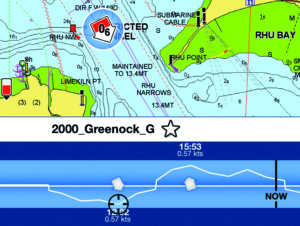 Planning at home: Today’s busy lifestyles struggle to afford us the time to get our charts out to look at the places we want to go, to peruse various charts and then write down the waypoints and routes for our passage. Systems like Navionics allow us to view where we want to go from the comfort of our sofa, plan waypoints and routes, and then, as we switch on the plotter on our boat, our planning automatically uploads to our plotter using Wi-Fi – very clever!

Be careful, though, as not all ideas from these chart providers are great. A few years ago, some manufacturers introduced a feature called ‘autorouting’. Plonk a cursor where you want to go and choose this option, and knowing the tidal heights and draught of your vessel the plotter will work out a route. In theory this is a nice idea, but in my opinion it has the potential to create a dangerous route. 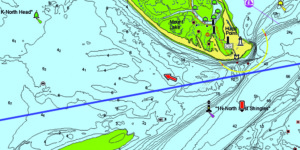 Take this small snapshot of a Poole-to-Yarmouth route, for example, which, because there is depth, takes you near the Shingles Bank, which I wouldn’t choose as the actual channel further north is a better route. In fairness, the system tells you as skipper that you have to choose a safe route, but for many, using this feature may be too tempting.

In summary, embrace these new tools as they are really great and make boating easier and more fun, but beware of their shortcomings. Have fun afloat!

Note: In this article we’ve mainly used screenshots from the iPad-based Navionics app. This app is the same charting software used in many plotters, and while the way the data is presented may vary between products, they all now do much the same.